Like Humans, Bats Use Both Sides of Brain to Listen

WASHINGTON (April 27, 2015) — Researchers from Georgetown University Medical Center and American University have shown that, like humans, mustached bats use the left and right sides of their brains to process different aspects of sounds. Aside from humans, no other animal that has been studied, not even monkeys or apes, has proved to use such hemispheric specialization for sound processing — meaning that the left brain is better at processing fast sounds, and the right processing slow ones. 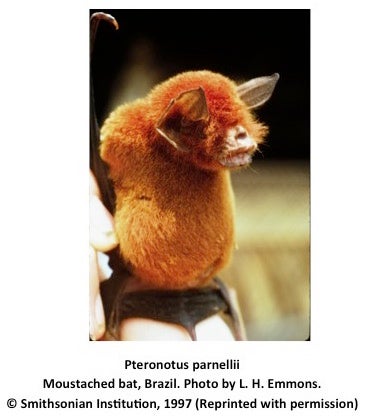 “These findings upset the notion that only humans use different sides of their brains to distinguish different aspects of sound,” says the study’s senior author, Stuart Washington, PhD, a neuroscientist at Georgetown.

“The slower timing of the right hemisphere may allow us to identify who is speaking, to gauge their emotional state via tone-of-voice and to tease out pitch in music, which is thought to be important for getting groups of people to coordinate their activities and can ultimately lead to the formation of cultures,” Washington says. “It is therefore reasonable to understand why humans needed to evolve this asymmetry in their brains.”

For mustached bats, the need is even more compelling, he says. “Bats need to use the fast timing of the left hemisphere to distinguish communication sounds from each other, because their communication sounds have rapid changes in frequency. Otherwise, they cannot communicate with other bats, and bats are even more social than humans.

“The bats also need to use the slow timing of the right hemisphere to use sonar — which relies on detecting small changes in frequency — to track the velocity of the fast-moving insects they fly after and eat,” Washington says.

This asymmetric sampling in bats is sex-dependent (males have more asymmetry than females), which is also consistent with humans, Washington says. “Women tend to use both the left and right hemispheres for language, but men largely use just the left hemisphere. Since this asymmetric sound processing is the basis for left hemispheric specialization for language, it too is assumed to be more common in men than in women.  Our results in bats may spur research to confirm that assumption in humans.”

One downside of having such asymmetrical sound processing is that it makes in-depth scientific studies of certain communication disorders, such as aphasia — a collection of language disorders —nearly impossible, he adds. “This problem is due to in-depth studies often requiring methods that can only be permitted in animals, but with our new understanding of bat sound processing, we may be able to do this research.”

Co-author John S. Tillinghast, PhD, of the department of mathematics and statistics at American University, concludes, “Our understanding of the time-frequency tradeoff is relatively new, but bat brains have been using it for millions of years.”

The study was supported by grants from the National Institute on Deafness and Communication Disorders and the Eunice Kennedy Shriver National Institute of Child Health and Human Development (HD046388, DC75763, DC02054 and DC008822). The authors report having no personal financial interests related to the study.