August 7, 2017 — Representing 33 states and the District of Columbia, as well as Bangladesh, Brazil, Canada and Korea, the 196 members of the Georgetown University School of Medicine Class of 2021 received their white coats and recited the Hippocratic Oath together for the first time Friday at the White Coat Ceremony (video).

Held at the end of the students’ three-day orientation, the ceremony took place in front of a packed Gaston Hall where family members and friends joined School of Medicine faculty, staff and alumni in officially welcoming the first-year students to the Hilltop and the profession of medicine. 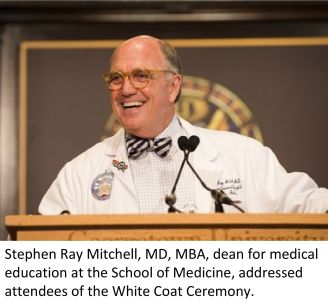 In addition to the white coats and stethoscopes the first-year medical students received, thanks to the generosity of the medical alumni board, the students were given pins indicating their designated learning society.

At the beginning of the ceremony, Mitchell introduced attendees to Bernard A. Fitzgerald, MD, who was there to coat Daniel Fitzgerald Gallagher, his grandson. Fitzgerald entered the School of Medicine Class of 1945 but graduated in 1944 when the school shortened its curriculum to accommodate the need for more doctors to serve in WWII.

The Class of 2021 will be the first to study under a newly reshaped curriculum at the School of Medicine that will enable medical students to spend more time receiving hands-on clinical training. “The seniors always leave the school better than they found it,” Mitchell said. “It is the senior class and junior class that helped create this curriculum you will begin, along with the faculty.”

Ultimately, the curriculum changes will help prepare students for the challenges of precision medicine, said Donald Knowlan, MD, professor of medicine emeritus. “What can the Class of 2021 expect in the future? Recently, the brilliant director of the NIH, Dr. Francis Collins reported anticipating incredible changes in our health care system,” he said. “Precision medicine based on genomic science, precisely tailored therapy directed to subcategory of disease in each specific patient. Wow. It’s beyond your wildest imagination. But your curriculum is being adjusted to meet this new demand.”

While physicians in the era of precision medicine will have more sophisticated tools at their disposal than the generations of medical professionals before them, 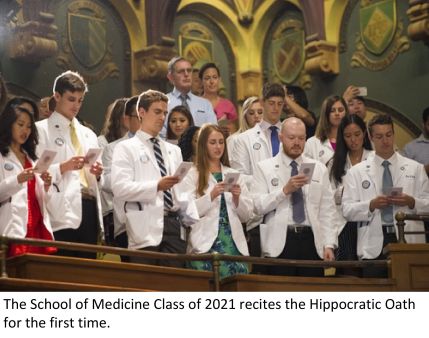 the importance of the patient interview and physical examination remain paramount. “Old-fashioned precision bedside medicine has been waiting for and is ready for precision medicine of the future,” Knowlan said. “Bring it on.”

When Knowlan started medical school in 1950, his class was all male and more than half of his classmates had served in WWII, he told attendees at the White Coat Ceremony. Early in his career, he saw the end of the use of iron lungs to treat polio and therapeutic use of phlebotomies, as well as the closing of tuberculosis sanitariums and huge psychiatric hospitals. “The science of medicine exploded after WWII with new specialties, new treatments,” he said. “Old diseases disappeared but new ones came.”

Fifty years after graduation, Knowlan and his classmates met for their reunion and agreed that they had chosen a great profession. “We practiced during the golden era of medicine, and so it will be with you, Class of 2021,” he said. “You are now entering your golden era and how lucky you are. Doctors are lucky people.”