These are just a few of the eclectic jobs previously held by members of Georgetown University School of Medicine (new window)’s Class of 2018. Yet upon donning their white coats during a ceremony held Friday, Aug. 8, they all joined the professional ranks of future physicians.

The White Coat Ceremony, held in Georgetown’s historic Healy Hall, is an annual tradition that marks the official start of a medical student’s career. This year, 196 students hailing from 30 states, the District of Columbia and six countries outside the U.S. donned the coat, followed by recitation of the Hippocratic oath.

“In taking the oath, you’re committing yourself to the highest standards of the profession. You’ll become a professional today—now,” Knowlan says. “A professional is someone who accepts the responsibility, the obligation and the sacrifices that go with the privilege to study and to practice medicine.”

The female-to-male ratio of incoming students is split nearly evenly, with 97 women and 99 men making up the class of 2018. Among them are five students who did their undergraduate work and one who completed her master’s in health systems administration at Georgetown’s School of Nursing & Health Studies (new window).

“At Georgetown you will …. study and work side-by-side with individuals from different disciplines and within a team-based framework. You will integrate educational excellence, ethics and a commitment to community,” Federoff said.

Each student was “coated” by either a Georgetown physician or a family member who is a medical doctor. The coats were sponsored by 270 School of Medicine alumni, who contributed nearly $55,000 for them and other programming.

“The name on your coat is not for your patients. It’s to remind you who you are. Periodically you need to look down, remember that, in order to give to others, you need to give to yourself and take care of yourself.”

Amy Prescott (M’18) was coated by her parents, John Prescott (C’77, M’81), MD, and Charlotte Dillis (M’81), MD. Despite coming from a medical family, Amy did not always dream of following in her parents’ footsteps of becoming a doctor—she thought she might pursue a PhD in epidemiology instead. 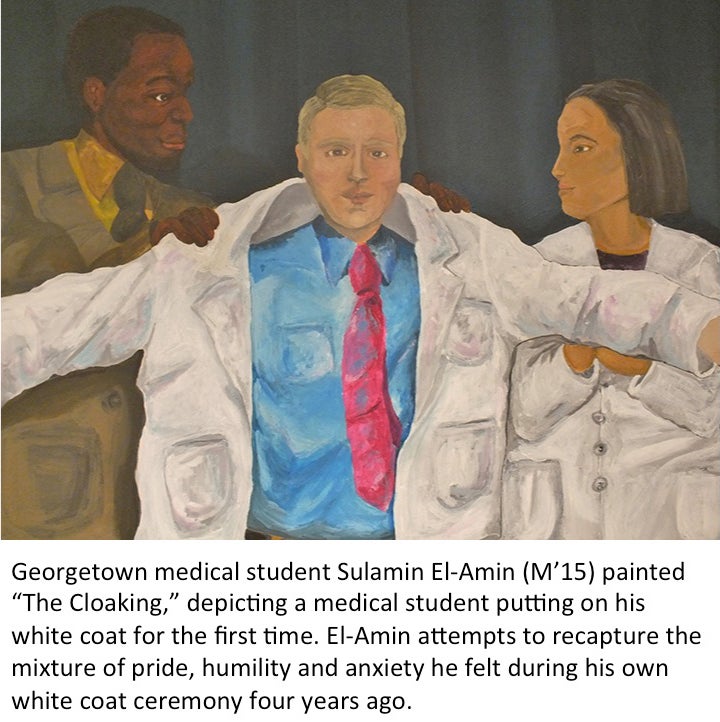 Yet once she determined she wanted to work with patients, Prescott embraced her family tradition.

“My parents have always cultivated my natural sense of curiosity, and encouraged me to ask questions. They have embodied cura personalis, so it has become important for me to study somewhere where their same values are lived out every day,” Prescott says.

She says she plans to immerse herself in Georgetown’s spirit of service to others, and to volunteer with the HOYA Clinic (new window), the student-led clinic for underserved patients in D.C.

Prescott’s parents, both Georgetown alumni who met at a class picnic the day before their first medical school class, say they are proud to sponsor Amy’s coat and to support her in her career decision.

“We hope Amy and all of her classmates remain lifelong learners committed to Georgetown’s core values and those of the medical profession. These include respect, compassion, dignity, humility and the realization of the wonderful privilege it is to serve others,” says John Prescott, who is chief academic officer of the Association of American Medical Colleges (new window).

Dillis, who is an associate professor of radiology at GUMC and director of the Women’s Imaging Fellowship Program, says the white coat ceremony brought back a flood of her own memories.

“This day has made me reflect upon my own career in medicine, from the excitement and anxiety of the early days of medical school to the many joys and challenges throughout the years.”

Caring for the Underserved

For Henry Claude Francois (M’18), his upbringing in a small village in Haiti—where medical care was a scarcity—fueled his desire to become a doctor. While he and his brother moved to Fort Lauderdale, Florida in 2005, he says his memories of his time in his native country have stayed with him.

“There was only one physician and he had the impossible task of responding to the health care needs of everyone in the village. So many people died just from a simple infection because there was no one there to care for them,” Francois says. “As I was getting older, I wanted to be that person who takes on the challenge and do the best that I can to alleviate their pain.”

Francois, whose father flew in from Haiti for the ceremony, is interested in a career in cardiology. He says he looks at the white coat ceremony as “the beginning of a long journey” along a path that requires “nothing but the best of me at all times.”