APRIL 25, 2016–How can music and dance add to conventional therapies? That was the focus for a recent gathering of artists who met April 18 for the The “Music and Dance in Healthcare Roundtable.”

The program, spooned by Georgetown Lombardi’s Arts & Humanities Program (new window), featured Jessica Phillips-Silver, PhD, a postdoctoral fellow in the Laboratory of Integrative Neuroscience and Cognition at GUMC who shared what her research into the neuroscience of music.

Your Brain on Tango

In a talk titled “The Rhythm That Moves Us, Connects Us,” Phillips-Silver, who has a PhD in auditory development and music perception, focused on how the brain processes music and movement.

“When the brain perceives music, it creates an irresistible motor response,” she said. “And then, when we produce the musical motion, whether it’s using the the body or an instrument, we are constantly perceiving our own output and that feeds back into the brain. So there’s this really beautiful circuit in the brain.” 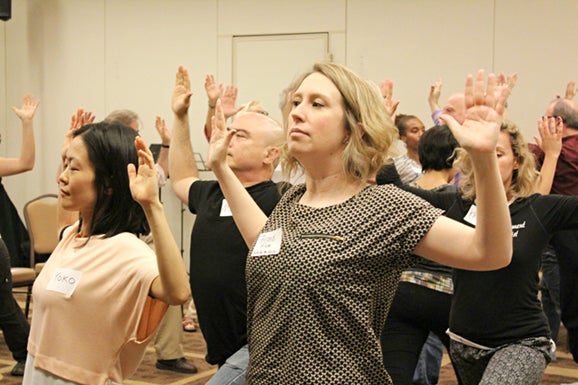 Phillips-Silver showed the group a video animation of a brain, being monitored through fMRI, listening to a tango. As the tango plays, several different parts of the brain light up.

“It gives you a sense of just how much of the brain is active,” she said. “There is no music ‘area’ of the brain. The brain’s musical network is so extensive that I don’t know of any other human activity that utilizes more of the brain than music. And that includes areas that involve intelligence, creativity, decision making and more.”

Phillips-Silver spoke about several empirical studies related to music therapy, including one that measured a premature infant’s responsive vital signs against music being played by a guitarist.  She also discussed music as a potential treatment for autism, citing a hypothesis that music stimulates mirror neurons, which researchers believe enable people to perceive and understand the actions of others.

Artists in the Arts & Humanities Program strive to “connect directly to the patient through their art and form a connection that helps the patient feel both supported and cared for by the hospital community,” according to Langley.  Many of the roundtable attendees have similar goals and work to achieve them through music and movement. One musician leads a choir for Parkinson’s patients and another is designing a soundscape to help alleviate the anxiety patients can experience when surrounded by constant beeping and other uncomfortable hospital noises. Two dancers lead stretch breaks in the clinics, while another focuses on the benefits of physical therapy for bedridden patients. 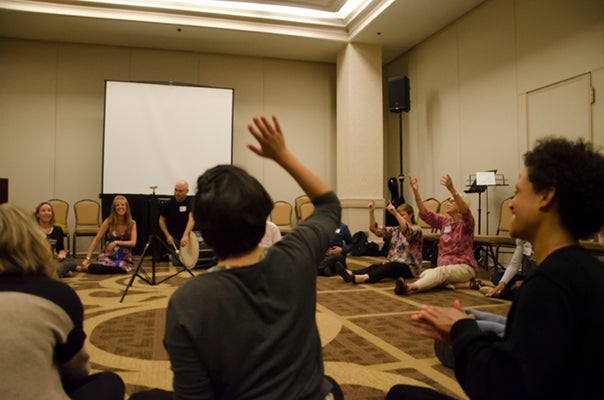 While the roundtable, which has been offered for eight years, has focused exclusively on dance in the past, this was the first year that music was included in a substantial way. “Musicians have a history of being accepted into the health care system,” Langley said. “There is a strong body of evidence showing that music helps relieve pain, anxiety and depression. We believe that dance can do the same. Dr. Phillips-Silver’s work on entrainment in music and movement help us understand that rhythm and dance are interconnected in the brain.”

After Phillips-Silver’s talk, the group engaged in experiential learning sessions. The sessions, led by Phillips-Silver and Keira Hart-Mendoza, a movement artist with the Georgetown Lombardi Arts & Humanities program, were designed to teach the group about polyrhythmic music and how group movement can create community and a sense of shared experience. During one exercise, the attendees sat in a circle and, one-by-one, said their names using different rhythms while incorporating a motion. By the time the circle was complete, the room was filled with a thunderous but rhythmic sound and a medley of matching gestures. Afterward, participants noted that they used each other as anchors to keep their rhythm.

“Our individual sounds and motions became part of a joyful, boisterous collective” said Langley. “It was awesome!”