For more than two decades, Ronald Brown has been trying to tell his story — one that likely mirrors the experience of as many as 250,000 veterans of Operation Desert Storm, the 1990-1991 Gulf War.

Brown, 45, says his health rapidly deteriorated after he and his fellow Army soldiers blew up an Iraqi bunker that contained munitions and what he guesses were nerve agents. A paratrooper in top condition before the mission, he barely passed a physical training test less than two months later. He had no energy, couldn’t breathe well, had excruciating headaches and was exhausted all the time. These issues never went away. 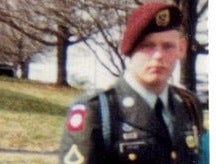 He says few people listened or took his complaints seriously — most suggested he was suffering from psychiatric fall-out due to combat stress.

The Department of Defense stated in an official 1997 letter to Brown that because he was in the area of the Khamisiyah bunker when Army engineers blew it up, Brown might have been exposed to “very low levels of chemical warfare agents.” But they stressed that death rates were the same between exposed soldiers and those who were not, suggesting there was little to worry about. The subtext was to buck up, says Brown, who takes 24 medications and five inhalers daily in a struggle to manage his health.

Then, in 2009, he met James Baraniuk, MD, a professor of medicine at GUMC who, in 2007, launched a series of neurological studies researching what is termed Gulf War illness.

Baraniuk began treating afflicted veterans whom he saw in his clinic in the late 1990s, and it appeared to him that these patients had a variant of fibromyalgia and chronic fatigue syndrome — disorders now associated with brain abnormalities.

“People were scrambling to understand the medical issues, but it seems the psychiatric explanation was the only one to really get traction. It was very frustrating to see the official denials,” he says.

But now, a new chapter in what Baraniuk calls a “20-year detective story” has been written. And now veterans with stories like Brown’s have has gained a national stage, told by leading newspapers, such as The New York Times and Los Angeles Times.

These mid-June news pieces point to new research from Baraniuk and Rakib Rayhan, the lead author and a researcher in Baraniuk’s lab, that strongly associate Gulf War illness to alterations in brain structure and function. Using functional MRI brain scans, one study, in the March 20 issue of PLOS ONE, found physical abnormalities in the brains of veterans, including significant changes in axonal structure, compared with unaffected study participants.

The second study, also in PLOS ONE on June 14, identified two distinct subgroups in veterans. Their bodies developed divergent reactions to physical exertion. To the researcher’s surprise, distinct regions of brain atrophy strongly correlated with the reactions due to exercise and may possibly have forced their brains to use the intact regions to make up for loss of function. The findings may help explain a wide variety of complaints in Gulf War illness.

Brown was featured in some of these stories, and said he agrees with the Veterans Administration and others who suggest his problem is all in his head. “But it is brain and central nervous system damage, not psychological,” he points out.

The research strongly suggests that “gulf war illness is real,” Rayhan, who led both studies, told The New York Times. “There is objective evidence that something is wrong in the brains of these veterans.”

You can’t fool an MRI scanner

While some prior studies have suggested that dysfunction in the central nervous system may underlie the debilitating symptoms veterans with Gulf War illness face, the Georgetown researchers decided to take a systems biology approach to understanding the disorder. Their work was funded in part by a Department of Defense Congressionally Directed Medical Research Program award.

“The difference between this research protocol and prior studies is that we looked at all of clinical facets experienced by the veterans not separately, but together,” says Rayhan.

“To understand such a complex disease really requires the integration of multiple research tools. We used exercise as a means to perturb their physiological systems; applied functional magnetic resonance imaging technology and serial measures in both cardiovascular and experimental pain indices. This ultimately allowed us to investigate the dynamic relationships between all of the biological systems,” he says.

In short, the research team shifted as far as possible from subjective reporting of symptoms to the most objective physiological read-outs, such as data on heart and brain function. As Baraniuk told USA Today about using fMRI to reveal the structure and function of a brain: “You can’t fake it.”

However, the lead author is also cautious about framing these current findings. “When you hear those stories, the hopes and dreams these veterans had when they were younger and to see where they are now, you realize the data has to be objective —it can’t go overboard in terms of hope, because they’ve suffered so much,” Rayhan told Forbes magazine.

If Georgetown studies are replicated — a step the scientists say is crucial, in part, because their studies were small — it may be possible to identify existing or new drugs that can more effectively treat the central nervous system issues that have been uncovered.

Rayhan and the paper’s junior authors credit the senior investigators — Baraniuk, John VanMeter, PhD, and Brian Walitt, MD, among others — for their scientific mentorship and teaching — something all three have done in the Georgetown research community for decades.

All of these scientists shared a commitment to the veterans to get the science right, Rayhan says. “I was very moved by these veterans’ stories. Many have lost a tremendous chunk of their lives battling this mysterious illness. Also many have families and are terrified of what the future may hold,” he says. “This is why the junior and senior authors are so honored to have worked on trying to understand this mysterious illness because it is the least we can do to give back to the people who have served our country.”

Baraniuk agrees, calling Brown, who he personally recruited to the studies, a hero.

“This guy was a paratrooper who liked to jump into the jungle at night. Now his symptoms keep him from enjoying some of even the simple things in life. No one would ask to be like this or pretend to have this illness,” he says. “For the sake of our veterans, I hope we have made an impact for them.”

“The story really isn’t about me, ultimately,” says Brown. “I just want to recognize brothers and sisters engaged in the longest war they have ever been in — they stepped up to plate, did their job and have paid a tremendous price for their service.”

Support for the studies described was provided by a Department of Defense Congressionally Directed Medical Research Program award (W81-XWH-09-1-0526) and federal funds (grant # UL1TR000101, previously UL1RR031975) from the National Center for Advancing Translational Sciences, National Institutes of Health, through the Clinical and Translational Science Awards Program.