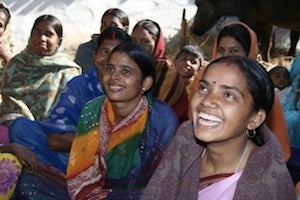 Victoria Jennings, PhD (new window), is an anthropologist — she has always been intrigued by the ways that individual behavior and culture interact. She also is an advocate for women’s rights and empowerment.

It is that intersection of interests that has fueled her work — and her passion — as head of the Institute for Reproductive Health (new window) (IRH) at Georgetown University.

The founding idea of the center, which began in 1985, was to empower women and couples globally to make healthy decisions about their reproductive lives. Though a relatively small player in the field of family planning worldwide, IRH has expanded its reach into more than 30 countries and has received close to $175 million in funding since its inception 28 years ago.

“We are a pretty small fish in the big global family planning and reproductive health pond. There are many large organizations with a lot more funding than we have,” she says.

“But I think what we do, frankly, is very transformational,” she says. “Our efforts really have the potential to change lives.” 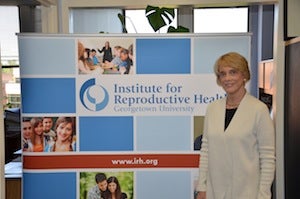 In developing countries, a woman’s lifetime risk of dying due to pregnancy and childbirth is 1 in 75, nearly 100 times higher than the risk in developed countries. An estimated 220 million women are not using a family planning method yet report that they want to avoid a pregnancy. The majority of these women live in Sub-Saharan Africa and South Asia.

It All Started with One Grant

It took one key grant to get IRH off the ground.

When Jennings came to Georgetown University Medical Center (new window) in 1985, she applied for a grant from the U.S. Agency for International Development (USAID) for research and development of fertility awareness-based methods of family planning. She wanted to devise a system by which women and couples globally could make healthy decisions about their reproductive lives through a better understanding of their fertility.

Somewhat to her surprise, USAID funded her five-year, $15 million proposal and IRH was born.

Since then, 90 percent of the Institute’s funding has come from USAID.  The latest USAID grant, for $19.8 million, came in October.

“I think USAID has been an amazing partner,” says Jennings. “And I think they would be the first to say that we achieved a lot more than they thought we would at the beginning.”

On top of that, the past few months have been very good to IRH, with another $5 million in funding coming in from other sources.

“We have wonderful partners who work with us on a very deep level,” she says.

IRH has developed an extremely low-cost and effective approach to family planning, which is now used in over 30 countries.

The researchers developed a computer model, based on data from the World Health Organization, which found women’s menstrual cycles are usually between 26 and 32 days long, and that women are most fertile from days eight through 19. This discovery led to the family planning method called the Standard Days Method®.

To make that method accessible to women worldwide, IRH developed CycleBeads®, a string of 32 color-coded beads representing each day of the menstrual cycle. A woman moves a ring between the beads daily — brown beads are infertile days; white beads are fertile days.
IRH tested the method in a clinical trial with 500 participants from Bolivia, Peru and the Philippines. When used correctly, the method was found to be 95 percent effective.

USAID missions worldwide have ordered CycleBeads, and Jennings and her colleagues have found that up to 15 percent of all new family planning clients in these countries use the Standard Days Method.

“This is a thoroughly modern method of family planning because it is based on human reproductive physiology. It was developed using a scientific model, and was field tested extensively,” says Jennings.

Studies have demonstrated that the Standard Days Method “is empowering for many women,” she says. “They report that gaining knowledge about their bodies and menstrual cycles has increased their self confidence and their ability to care for their health.”

Men have also become partners in this method of family planning, she adds.

Among other uses, the influx of new funding will enable IRH to investigate the best ways to make the Standard Days Method accessible to as many women as possible.

One option is CyclelTelTM, a text messaging approach that can be used by women with a simple cell phone. CycleTel is being implemented in India, “and by the end of three years, we expect to be reaching more than 1 million women,” Jennings says.

Other approaches include a smart phone app called iCycleBeadsTM, and CycleBeads® Online, which can be used on any internet-enabled device.
IRH continues to expand its work in other areas of focus, including reducing gender-based violence and using social networks to improve reproductive health, among others.

“We’ve had a very productive 28 years,” says Jennings, referring to the nearly three decades since IRH’s founding. “We look forward to an equally productive future.”

CycleBeads are a patented technology owned by Georgetown University that has been licensed to Cycle Technologies for commercialization. Jennings is an inventor on the patent.