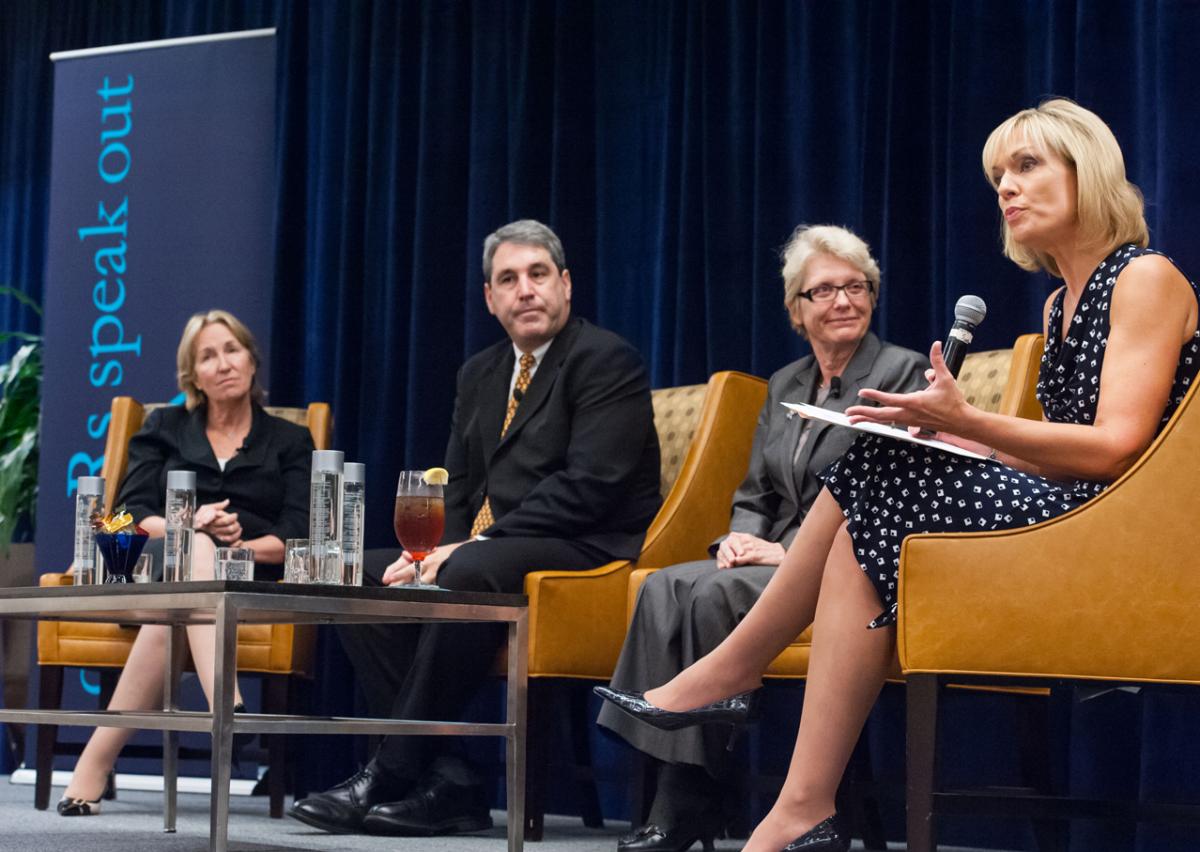 A half-century ago, “Stop smoking!” was the basis of our nation’s nascent cancer prevention program – essentially the product of the 1964 Surgeon General’s Report on Smoking and Health that tied cigarette smoking to lung cancer.

It comprises evolving cancer screening methods, drugs and vaccines to prevent the disease, a renewed focus on environmental factors including lifestyle changes, genetic counseling for those at risk, and governmental policies such as smoke-free laws, to name a few.

Meanwhile laboratories across the world continue to advance their understanding of cancer’s molecular underpinnings.

Earlier this month, a blue-ribbon panel of cancer prevention experts at Georgetown University Medical Center (GUMC) gathered for the latest installment of the popular community education series, Doctors Speak Out. Titled “Cancer Today: The Challenge of Prevention,” the October 4 luncheon drew an audience of about 120 for a lively panel discussion, followed by a half-hour question-and-answer session.

“Women are the gatekeepers to family health,” Brikman said, noting that cancer took her own father at age 58. “We didn’t know the genetic path our family was on. The more we know, the more we can become empowered.”

Then Brikman opened the conversation among the panel with the key question. “What causes cancer?”

According to the National Cancer Institute, the most common causes of cancer include tobacco use, sunlight, radiation exposure, chemicals, viruses and bacteria, hormones, alcohol use and a poor diet, lack of physical activity or being overweight.

While most of these causes can be modified, other common causes such as aging and family history cancer cannot be changed.

Still, there is often no clear understanding of why the more than 1.6 million people in the U.S. develop the disease each year.

Regardless of the cause, the taproot of cancer is a change – or mutation – in the assigned function of a gene or genes.

“In a sense, all cancer is a genetic disease caused by changes, mutations, to your genes,” said Marc D. Schwartz, Ph.D., professor and co-director of the Cancer Prevention and Control Program at Georgetown Lombardi Comprehensive Cancer Center. His research involves genetic changes that are inherited — passed along from parents and grandparents.

People at an increased risk of developing cancer because of their family history have various strategies for fending off their cancer. Schwartz and his team have developed and evaluated state of-the-art genetic counseling techniques that proactively help these patients make informed decisions about genetic testing and individualized medical management.

The decades-long evolution in cancer prevention is propelled in part by common sense: don’t overdo it on activities known to be harmful such as alcohol consumption or sunbathing. And a healthy dose of realism to guide personal choices and to assess risk is an important factor in cancer prevention strategies. In other words, researchers suggest focusing on factors that can make a difference.

“We worry about cell phones but we know that physical activity decreases your risk of cancer and that’s a thing we can do every single day,” said Schwartz.

Cell phone use has yet to be directly linked to cancer development, but physical inactivity is implicated in cancer causation.

“We need to put risks in perspective,” he added.

Concrete cancer causes, including the undeniable links between smoking and lung cancer, offer scientists and physicians profound insights into the seemingly countless triggers of the disease.

“Theoretically, one third of cancers never would have started,” if tobacco smoking had never been introduced, said Cheryl Healton, Ph.D., president and CEO of the American Legacy Foundation, which develops programs to address the health effects of tobacco use. The Foundation’s Schroeder Institute and Georgetown Lombardi formed a consortium in 2009 to enhance tobacco-related research.

An expert in evidence-based public health best practices, Healton said that while 46 million Americans have quit smoking, another 45 million still smoke. Lung cancer is the leading cause of cancer deaths nationally, Healton said, adding that many smokers have less education and less income than people who don’t smoke.

She noted that poverty can, in effect, trigger cancer. Disparities in exposure to known carcinogens reflect situations more common among lower income people. These might include people living in older homes more prone to asbestos contamination or those located near industrial areas or highways where pollutants are more plentiful.

Rosemary Sokas, M.D., M.O.H., an occupation physician, said that after smoking, second-hand smoke and radon are “neck-and-neck” for the second leading causes of lung cancer in the U.S. Asbestos, diesel exhaust, and other exposures are important for certain populations such as those who have occupational exposure, said Sokas, chair of the department of human science at the Georgetown University School of Nursing & Health Studies.

In less developed countries, where poverty is greater, indoor cooking without proper ventilation can cause lung cancer as well as other illnesses. Moldy foods are also culprits of disease because they contain aflatoxins, which cause liver cancer.

Informed decision making can help each of us to minimize our own risk and prevent cancer, the panelists said. Sokas cautioned the audience about the human tendency to exaggerate generalized risk – such as air travel – while minimizing more common risky behaviors like smoking, drinking and driving.