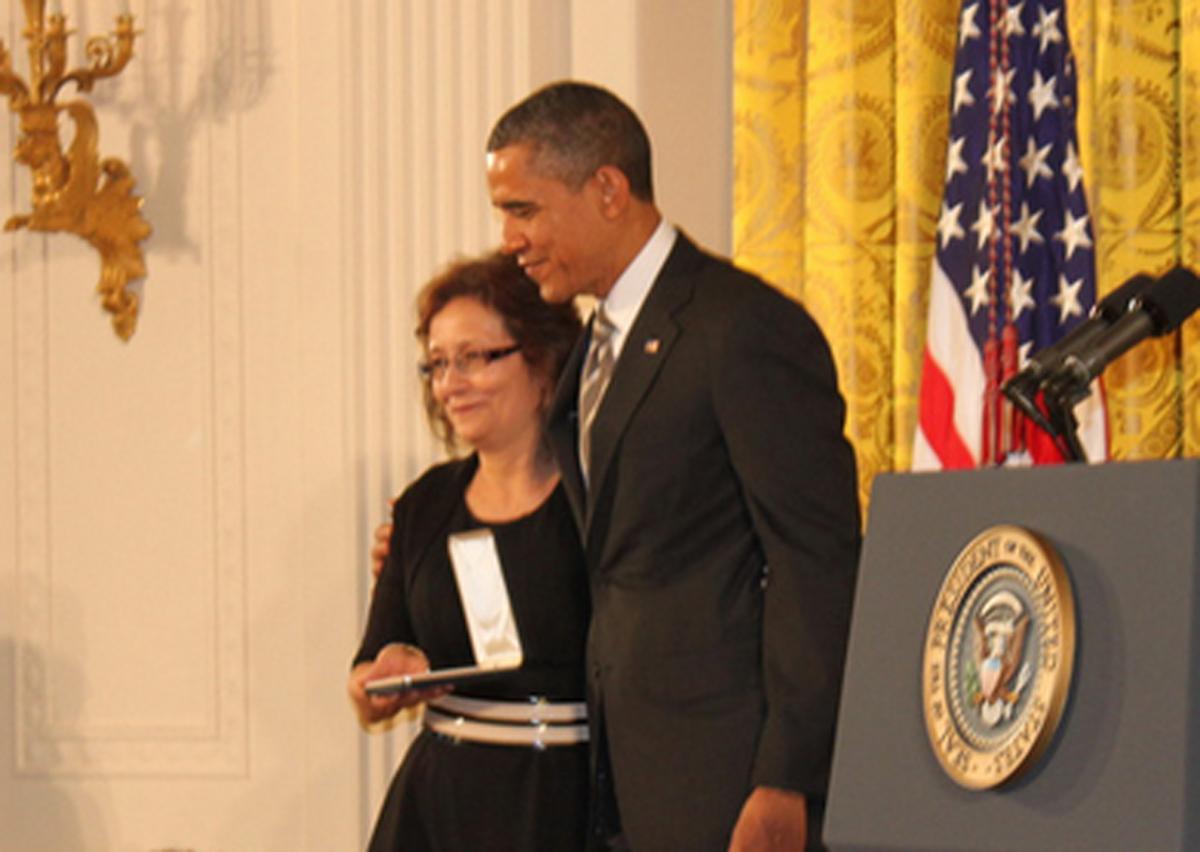 Gomez, who graduated from the School of Nursing & Health Studies (NHS) in 1977, is founder, president, and CEO of Mary’s Center. The organization was established in 1988 to provide prenatal and postpartum care to underserved Latino women in Washington, D.C.

Gomez and the 12 other 2012 medal winners were selected from nearly 6,000 public nominees for the honor, created in 1969 to recognize U.S. citizens who perform exemplary deeds of service.

“It is my distinguished honor to award these individuals the 2012 Citizens Medal for their commitment to public service,” the president said when announcing the award winners. “Their selflessness and courage inspire us all to look for opportunities to better serve our communities and our country.”

At the medal ceremony, Gomez was called to the stage in the East Room to stand with the president as a military aide read aloud her award citation.

“The United States honors Maria Gomez for sharing her strengths with the underserved,” the aide said.

Since its founding, Mary’s Center – which started in a basement in the Adams Morgan neighborhood – has grown to include multiple sites and now serves more than 24,000 socially and medically vulnerable individuals.

“Our entire community is proud of this accomplishment and of the extraordinary impact Maria has made to our Washington community in establishing Mary’s Center,” said Georgetown President John J. DeGioia, PhD. “We are deeply grateful for her commitment to serving the most disadvantaged members of our city community, following the Jesuit tradition of becoming a woman for others.”

“Maria is a strong voice and leader for social action within our city and beyond,” he said. “Her work at Mary’s Center has been a true force in reducing health disparities. She embodies our mission to improve the health and well-being of all people.”

Gomez described the center’s social change model – which focuses on education, health care and social services – when she visited Georgetown’s campus in March 2012 to deliver the annual NHS values based lecture.

“One relates to the other,” she said. “The three are really what we feel are the pillars of how one should deal with health disparities.”

During her 2012 talk, Gomez said the Jesuit education she received at Georgetown, where she earned her bachelor of science in nursing, has inspired her work.

“The Jesuit education of serving others without expecting much back … is amazing,” she said. “You have been given so much, you have to give back.”

A number of NHS students and faculty work with Mary’s Center in clinical education, internships, and a community-based participatory research initiative with immigrant youth.

To watch the video of the presentation of the 2012 Presidential Citizens Medals, click here.