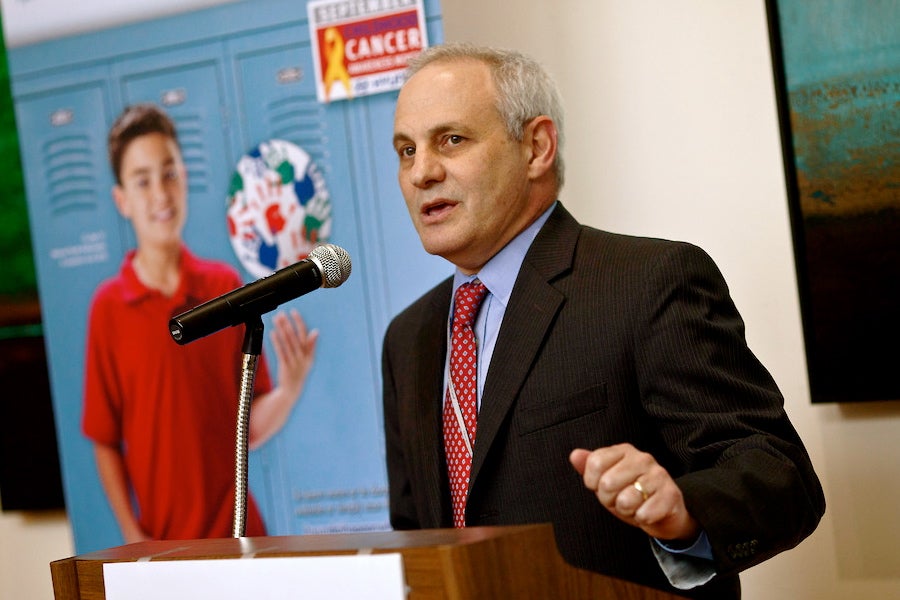 In science, serendipity doesn’t just happen. You have to be prepared — all the right conditions have to be in place to take advantage of a “chance” occurrence. That was the case early in the career of Michael B. Atkins, MD, the newly named deputy director of Georgetown Lombardi Comprehensive Cancer Center.

Atkins had finished his medical training at Tufts University in Boston and his internship and residency at Tufts Medical Center when he joined one of the hospital’s laboratories for a research fellowship. The lab was studying tumor immunology, a subject that had long interested him. The lab director, James Mier, MD, had, during his own fellowship, purified interleukin-2 (IL-2), a protein that regulates white blood cells responsible for immunity.

“I really liked cell biology and I was attracted to oncology because it involved studying how cells behave when they are perturbed,” Atkins says. “A lot of questions needed answers, and those answers could improve cancer treatment.”

In the midst of his three year long hematology-oncology fellowship, news of potential cancer treatment using IL-2 reached the mass media, culminating in a cover story in Time magazine. “It looked like the next great breakthrough,” Atkins says.

His laboratory director applied for a grant from the National Institutes of Health (NIH) to study IL-2 therapy in cancer patients, and it was awarded, along with similar grants to five other sites. Atkins was just finishing his fellowship when the scientist in charge of the grant left. He was tapped to take the helm.

“Within three months of my fellowship, I was in charge of the largest grant Tufts Medical Center had received from the NIH, and was working on the hottest medical topic,” Atkins says.

That is the serendipity part of Atkins’ story. He was prepared for the sudden opportunity he was given. What he did with it cemented the trajectory of his career — his contributions to the treatment of melanoma and kidney cancer with immune-based therapies.

He found “it really takes a team effort to make advances. A lot of people were part of this effort at our institution and we collaborated with other medical centers looking at the same issues. The sub-questions we investigated — such as why some people benefitted from IL-2 therapy while others didn’t — created further collaborations with experts in such fields as pathology, surgery, and imaging. That led to new knowledge, new fields of study, new investigations and partnerships.”

In 1997, Atkins left Tufts for Harvard Medical School. There he found “a robust group of scientific collaborators” which included a critical mass of investigators needed to successfully apply for the first melanoma Specialized Programs of Research Excellence (SPORE) grant, a highly competitive NCI-funded grant that incorporated a host of investigators from various disciplines focused on translating scientific breakthroughs in a specific cancer type. Atkins was the co-principal investigator of this new grant. What he learned from putting together this SPORE led him to successfully apply, as Director, for first and only SPORE grant ever funded in kidney cancer.

“Running these two grants changed the way I approached science,” he says. ”They brought me in contact daily with stellar laboratory scientists and outstanding clinical investigators and encouraged me to identify clinical questions that could benefit from scientific inquiry and scientific advances that were ripe for potential clinical application,

“Suddenly all of oncology was a potential SPORE project,” Atkins says.

In addition to his work at Harvard Medical School, Atkins was associate director for the Beth Israel Deaconess Cancer Center. He established and led the cancer center’s cutaneous oncology and biologic therapy programs and the cancer clinical trials office, as well as the kidney cancer program of the Dana-Farber/Harvard Cancer Center.

Atkins’ work helped contribute to the development of six newly approved drugs for the treatment of kidney cancer and three for melanoma, with more on the way.

In his new position as deputy director of Georgetown-Lombardi, Atkins expects to continue his drive to improve treatments for an expanded array of cancers. He intends to work with investigators in areas of long-standing strength, including breast and gastrointestinal while trying to bolster ongoing efforts in kidney cancer and melanoma. In particular, he hopes to link kidney cancer efforts at Georgetown Lombardi with Harvards’ existing SPORE, and Atkins’ sees a “tremendous opportunity to grow melanoma research and treatment using novel immune based and tumor directed therapies.”

Along with the leadership of Georgetown Lombardi Director Louis M. Weiner, MD, Atkins will enhance the cancer center’s strategic vision and support the center’s operational direction by working to grow clinical and translational research activities and increase its funding base.

In addition, he will lead the expansion of the clinical and research activities in the areas of melanoma and kidney cancer as well as facilitate multidisciplinary, disease-specific program development at MedStar Georgetown University Hospital and across the MedStar Health network.

“Georgetown has a very strong scientific base of researchers who now have access to, and a growing relationship with, the MedStar Health network that allows them to take their advances and link them with clinical investigators,” Atkins says.

“As the only comprehensive cancer center in the nation’s capital, Georgetown Lombardi has a magnificent opportunity to have a major impact on the region by expanding its clinical and translational research programs, helping influence public policy, and by creating general excellence worthy of enhanced philanthropic support.,” he says.

In short, Atkins is excited that his new role will enable him to foster the conditions at Georgetown that lead to serendipity. “My job — my passion — is creating interactions between scientists and clinicians, and providing the infrastructure they need to make what appears to be a chance happening possible,” he says. “It takes networks, collaborations, new insights, and the infrastructure capable of responding quickly to new opportunities. I want to make those more possible than ever at Georgetown Lombardi.”