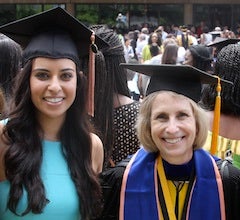 Take the example of Christina Marie Hanna, a fourth-year medical student. Hanna’s interest in promoting healthy behavior in adolescents has led to her work in smoking prevention among youths in Egypt, where her parents were born, and to work to address the HIV/AIDS health issue in the District of Columbia, where case rates are the highest in the nation.

But despite her impressive body of work — she was a School of Foreign Service undergraduate at Georgetown, a Georgetown Health Justice Scholar, a Fulbright Fellow in Egypt and an intern with the World Health Organization — Hanna felt she was missing a few key tools in her growing medical toolbox. If she wants to address the patient both as an individual and as part of a broader cultural dynamic, Hanna knew she needed a firm grounding in public health.

So Hanna took advantage of a new opportunity for Georgetown medical students: a chance to pursue a dual degree in medicine and public health. Thanks to this new option, Hanna was able to earn her Master of Public Health (MPH) from the Johns Hopkins Bloomberg School of Public Health (new window) in less than a year while pursuing her medical degree. She will receive her medical degree this spring.

Through a formal agreement between Georgetown’s School of Medicine and the Bloomberg School of Public Health, a prospective Georgetown medical student can apply jointly to Georgetown for an MD and to Hopkins for an MPH — with the public health coursework taken usually between the third and fourth years of medical school.

“Students from around the country apply to the Bloomberg School, but our agreement with Georgetown is a first,” says Marie Diener-West, PhD, chair of the master of public health program, and a professor of biostatistics education at the Bloomberg School. “The students we have seen from Georgetown are extremely bright, extremely dedicated — and their commitment to social justice is real.”

Four Georgetown students have pursued the MPH option and Diener-West has shepherded the latest two — Hanna and current MPH student Mutsa Nyakabau, of the class of 2015.

“In the past, physicians sought an MPH after they were in practice and research. Now medical students are doing so — this would not have been seen 10 years ago,” she says. “Younger people have a broader focus, due to their experiences as an undergraduate and in medical school. It’s a smaller world now.”

“Hopkins is likely the best school of public health in the country, especially in epidemiology and population-based research,” says Stephen Ray Mitchell, MD, dean of medical education at Georgetown School of Medicine. “It is important that we emphasize the personal relationship between one doctor and one patient. But for us to be physician leaders, we need to understand how one manages a population of patients and how we have an impact on a community.

“Given the status and proximity of the Bloomberg School, a combined MD/MPH for our students is a powerful combination that moves us toward this goal,” Mitchell says.

The Chance to Ask ‘Why?’

Her 11 months at the Bloomberg School gave Hanna “a more holistic approach to health that complements the training I receive as a medical student.” She focused on epidemiology and biostatistics — a concentration led by Diener-West — and learned about conducting a needs assessment, proper survey design, data collection methods and biostatistical data analysis.

The MPH year is set up in five terms, each eight weeks long. For her master’s capstone project, Hanna chose to study the connections between sexually transmitted infection risk and substance abuse among urban adolescent males and females in Baltimore.

With a strong interest in both primary care and global health, Hanna is now applying for a combined residency in internal medicine and pediatrics. “My goal in combining these two residencies is to be able to follow patients across their lifespans and to improve the transition in care as adolescents move from pediatric to adult health care,” she says.

“I think the MPH gives medical students the chance to ask ‘Why?’” Hanna says.

While physicians are generally trained to look at each case individually, “the training from the MPH allows you to look beyond that individual to the community or population level to address systemic changes,” she says.

Mutsa Nyakabau, the current Georgetown medical student pursuing his MPH at Hopkins, is strongly focused on returning to his homeland, Zimbabwe. He wants to take on the dominant health concerns of his nation — among them cholera, malaria, HIV and cervical cancer — and to work for the Zimbabwean Health Ministry.

“One must address the issues from the lens of public health to ensure that the impact of such ailments is diminished in the population,” he says. “An MPH is thus a valuable addition to the arsenal of anyone wishing to broaden their scope so as to negotiate maladies that claim lives in droves.”

Nyakabau’s MPH concentration is in infectious diseases and his capstone project involves the geographic and seasonal tracking of malaria incidence.

Nyakabau employs what he calls an old Zimbabwean adage when asked to describe why Georgetown medical students should consider pursuing the joint MPH program: “‘Chitaurirwa hunyimwa mbare dzekumusana.’ This expression translates as ‘any worthy pursuit is not adequately captured in words, it must be experienced.’”