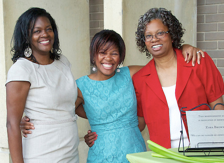 CBCC’s most loyal community partners and donors attended the program, which featured a stellar list of speakers and live music. The Summer Celebration, this year’s first CBCC event, reinforced the collective purpose of the center while honoring those who paved the way. CBCC is a community-based program of Georgetown Lombardi Comprehensive Cancer Center, part of Georgetown University Medical Center.

Brown had a family history of breast cancer; she was of the fourth generation of women in her family to have the disease and she battled it twice. In March 2013, she died from complications related to ovarian cancer.

Brown leaves a rich legacy of advocacy. She was instrumental in establishing CBCC, which opened its doors in 2004 to offer free quality breast care services to women in the DC community.

The event was emceed by local broadcast personality JC Hayward, who is also a board member at Arena Stage. Hayward regaled guests with warm conversation and shared her own intimate experience as a breast cancer survivor.

“I don’t know if you know, but I am a breast cancer survivor – one year now,” said Hayward. “So there’s a special place in my heart for this organization and what they do.”

The program began with a welcome from Louis M. Weiner, MD, director of Georgetown Lombardi. Weiner talked about the communal value of CBCC while reminding everyone to consider the individual lives that are touched by the organization.

“Let me give you some numbers: 4,605 women had mammographic screening at CBCC between 2010 and 2012. Thirty-five of those women were diagnosed with breast cancer. That’s 35 women who might not otherwise have been tested,” said Weiner. “Too many women in the DC area cannot get the services they need because they don’t have coverage or are just afraid – that’s why CBCC is so important.”

Maria Harris Tildon, who spoke on behalf of CBCC’s presenting sponsor CareFirst, elaborated on the importance of sponsorship for community organizations.  Additionally, Alice G. Haase, Esq., discussed how learning about breast cancer mortality rates in the nation’s capital drew her to get involved with CBCC.

“DC has the highest rate of breast cancer mortality in the US,” said Haas, who also chairs the CBCC’s Community Advisory Council.

Wanda Lucas, executive director of CBCC and a seven-year breast cancer survivor, spoke of recent successes and thanked her staff and advisory council for helping sustain the center’s work.

CBCC honored Zora Brown with a plaque and poster display, accepted at the event by Brown’s nieces and friends. In a ceremony later this year, CBCC’s mammography room will be dedicated to Brown.

The program concluded with a tribute to Brown from Lucile Adams-Campbell, PhD, associate director of minority health and health disparities research at Georgetown Lombardi.

Adams-Campbell recalled Brown’s many achievements, including being the first African-American woman to be appointed to the National Cancer Advisory Board. Brown also launched the public relations campaign that helped Jeanne Mandleblatt, MD, MPH, establish CBCC nearly a decade ago.

Adams-Campbell is also a pioneer in her field; she was the first African-American woman in the country to receive a PhD in epidemiology. She recalled fond personal memories of working with Brown and her crusade against cancer years ago. Adams-Campbell went on to discuss one of Brown’s gifts to CBCC.

“I don’t know how many of you all know this, but Zora came up with the CBCC logo,” said Adams-Campbell. “That butterfly – that was her. She did that.”