An Impact on Society through Discovery, Disclosure, and Delivery 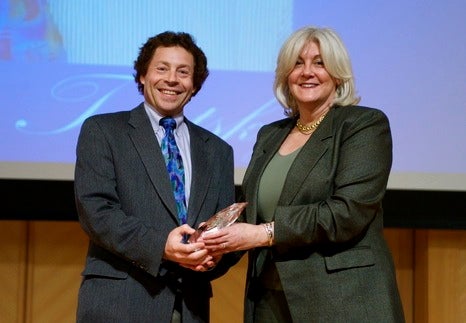 The road from science to innovation to a business can be long and complex.

Jeffrey Toretsky, MD, can attest to that.

“Honestly, there are so many things to learn about this process — like learning the business, and working with the university and the company to ensure roles are appropriately separated along with new government laws,” explained Toretsky, who was honored for his achievement in technology commercialization at the Georgetown University 2013 Patent Awards Ceremony on Jan. 30 organized and hosted by the University’s Office of Technology Commercialization and held at the McDonough School of Business’ Lohrfink Auditorium.

Toretsky has demonstrated an admirable ability to learn the ropes of company development while continuing with his many university responsibilities including an active research program.

Before receiving his award, Toretsky told the audience about a chance to cure cancer, from inception to compound to company.

Toretsky has been actively pursuing research that will lead to new and more specific therapies for a rare cancer called Ewings sarcoma, a disease in which cancer cells are found in the bone or in soft tissue, occurring most frequently in teenagers and young adults.

Each year in the U.S., 400 to 500 people are diagnosed with Ewing’s sarcoma. “Treatment typically involves six months of nauseous chemotherapy.” explained Toretsky. Eventually 40 percent of these patients die of their disease. The key to battling this specific cancer for Toretsky has been to understand a unique critical protein that, if inactivated with a drug, could result in less toxic and more effective therapy.

In 2009, Dr. Toretsky and his team described a molecule called YK-4-279 that targets Ewings sarcoma. Given the small numbers of Ewings sarcoma patients, pharmaceutical companies were uninterested in pursuing the extremely costly clinical development of YK-4-279.

So, in 2010, he founded TDP Biotherapeutics, Inc., in order to facilitate the drug development. Since then, Toretsky’s lab has been actively pursuing a deeper understanding of the mechanisms of YK-4-279 while dissecting the protein-protein interactions of EWS-FLI1, which initiates and sustains the cancer.

Toretsky explains his unique approach as targeted therapeutics, which is now the standard expectation in new anti-cancer drugs. His team is now working to make the compound even more specific to Ewings sarcoma. While several stages of the research process remain before the drug can move into clinical trials, this could be the first targeted therapy to be developed for Ewings sarcoma.

While Toretsky’s work to develop molecule YK-4-279 is far from complete, he has shown great dedication to developing a therapeutic for the childhood cancer, and to working in his dual role as an investigator with Georgetown and his company.

In conclusion, Dr. Toretsky reminded the audience “although there is still a lot to figure out regarding the business aspect of innovation, we should focus on the science, which is why we are here.”

Driving the Engine of Discovery

Toretsky was joined by two other speakers who talked about commercialization, innovation and start-ups, including featured speaker Kenneth C. Carter, PhD, CEO of NexImmune Inc., a start-up company that is developing human therapeutic products using an innovative approach to immunotherapy, and Thomas J, Meade, PhD, who pioneered the development of the first bioactivated magnetic resonance probes and new hand-held chips for DNA diagnostics.

Spiros Dimolitsas, PhD, senior vice president for research and chief technology officer for Georgetown University, said the annual awards event created a unique chance for gathering with colleagues. “It is spectacular to have an opportunity to truly meet and honor each other here.”

Howard J. Federoff, MD, PhD, executive vice president for health sciences and executive dean of the School of Medicine congratulated this year’s awardees for being the engine of discovery at Georgetown. “We can sometimes lose sight of our work as purely scholarly, when it could have tangible benefits to society. We should not only be honoring what you do, but recognizing that we should be doing more of it.”

“If we think about discovery, disclosure and delivering on the promise of our work as it will be impactful on society, then we will be the driving factor in our new culture,” Federoff said.