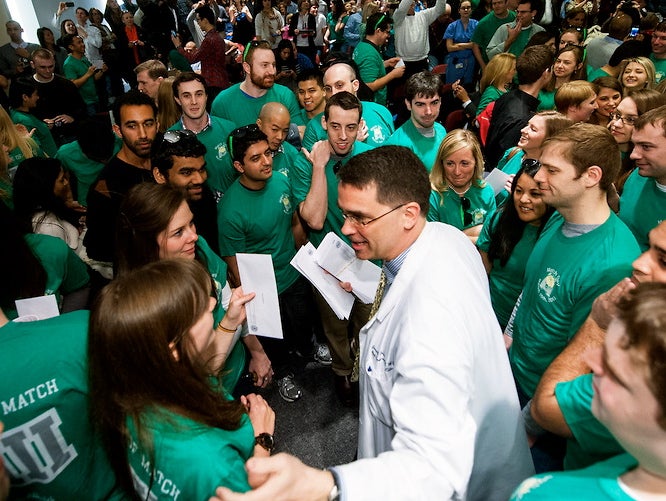 “The Ides of Match XIII, Veni, Vidi, Vici.” So read the back of the green t-shirts worn by Georgetown University School of Medicine’s class of 2013 on Match Day, March 15. The statement represents a play on words from Shakespeare’s Julius Caesar, “Beware the Ides of March,” and captures Caesar’s own writings, who said, “Veni, Vidi, Vici,” meaning “I came, I saw, I conquered.”

With that, the tone at Georgetown’s Match Day festivities was set.

Each year, fourth-year medical students across the country hold their collective breath and open sealed envelopes at the same moment — noon eastern daylight time on the third Friday in March. This is the medical school moment of truth — the envelopes contain news of their future as physicians, namely the residency program they have been accepted into.

Residency programs are where newly minted doctors learn to practice medicine. And while rigorous, medical school is only the first step — an academic boot camp of sorts; essential, tough, transformative, and illuminating — but just the half-way point in medical training. For the next three to seven years (depending on the specialty), the doctor must successfully complete a rigorous apprenticeship in the real-life setting of a fully operational clinical enterprise (a hospital or clinic) conducting patient care.

Medical students do not perform surgery, for example. They learn the art of surgery as surgical residents, under the guidance of skilled surgeons.

NRMP, SOAP, and the Electronic Scramble

The application process for residency program slots normally begins during the final year of medical school. After students send off applications, programs review them and bring in selected candidates for interviews held between October and February.

By February, medical students submit a wish list of preferred options to the National Resident Matching Program (NRMP), the private, non-profit organization that coordinates and referees the process. Correspondingly, residency programs submit a list of preferred applicants ranked in order. Neither the applicant nor the program is allowed to see each other’s list.

Those students who do not match into their programs of choice gather on what is known as “Black Monday,” four days before Match Day. Fortunately only a very small number of Georgetown students usually need this process to find a residency slot. There, a team of devoted faculty advisors preside over a confidential process called the Supplemental Offer and Acceptance Program (SOAP). Last year, SOAP replaced the so-called “scramble” with a more efficient residency matching process. SOAP makes available locations of unfilled positions so unmatched students can submit their applications to these programs using AAMC’s Electronic Residency Application Service. When the applications are received, resident program directors generate a list of candidates in order of preference, and the NRMP offers positions to the candidates for up to eight rounds. Once an offer is accepted, that student receives the match.

The 18 Georgetown students who received medical education funding from the military are placed using a different process and learned of their assignments in early February. After graduating, they’ll be commissioned into their selected branch of service and train with the Armed Forces.

Match Day at Georgetown, as at other schools, is always exciting. It was standing room only in the New Research Building auditorium with hundreds of parents, classmates, family and faculty awaiting the noon hour.

A little before 12 p.m., Stephen Ray Mitchell, MD, dean for medical education, held up a fistful of envelopes and announced, “Congratulations to all of you. This is such a spectacular match. Some of you will not be traveling all that far — six of you will be going up two beltways to Johns Hopkins. About a quarter of the class — 46 of you — are staying to work at not only MedStar Georgetown University Hospital, but other MedStar Hospitals in the area. We own that little school called Harvard — 11 of you are going there. We are sending 29 of you back home to California — strangely that’s the same number that came here from there four years ago. New York, mostly New York City, will claim 26 of you. Chicago, where the scrubs come with long underwear, 11 of you will be chilling out there…”

And so it went — 15 to Pennsylvania, five to Texas (“…we have hair spray and steak sauce in your gift bag…” Mitchell joked), five to the rainy state of Washington; all told, 28 states.

In this year’s match at Georgetown more than half the class, 53 percent, matched into residency programs considered to be in the top 25 percent in the nation, as measured in the U.S. News & World Report annual graduate school rankings. Competition, normally tough, has become particularly fierce this year. Because of reductions in federal funding for graduate medical education, growth of U.S. residency programs has stalled. At the same time, medical schools, responding to a projected shortfall of 90,000 physicians by 2020, are accepting and graduating more students each year (an additional 960 participated in this year’s match).

But when Match Day fulfills its highest purpose — linking the most desired students with their most wanted programs — the results are “phenomenal,” says Vincent DiMaggio (M’13), whose was first inspired by his childhood physician. “Then I intellectually fell in love with medicine here at Georgetown,” he said. “I couldn’t get over how much I liked working with children, taking care of them. So it was pediatrics for me, and the program at the University of Chicago is fantastic. I like the people there — it’s a great fit for me. I’m ecstatic.”

Importantly, 39 percent of the class of 2013 will be entering primary care, well ahead of a modest national upward trend of physicians electing to serve patients in the areas of internal medicine, pediatrics and family medicine, considered to be a proxy for primary care. Despite demonstrated need, encouraging graduating students to choose primary care careers remains a challenge.

Ready for the Future

A small portion of that challenge will be taken up by students such as Greg Shumer (M’13), who will be entering the family medicine program at University of Michigan. Through “couples matching,” his fiancée, Jasmine Zheng (M’13), will enter physical medicine and rehabilitation there. “University of Michigan — go blue!” said Zheng, “We’re both from Michigan, we met here, so we’re really, really excited to be going back together.”

Emily Herzberg (NHS ’08, M’13), who majored in human science at Georgetown University School of Nursing & Health Studies and completed a Fulbright Scholarship year in Argentina before med school, is headed for the pediatrics program at Massachusetts General Hospital.

“Everyone I met there was incredibly welcoming!” Herzberg said. “It just felt like home. I knew it would be a wonderful way to continue the incredible experience I have had at Georgetown, especially the emphasis on community. It was truly important to me to find a place that would allow me to continue to grow in addition to continuing some of the elements I have appreciated the most about my medical experience at Georgetown.”