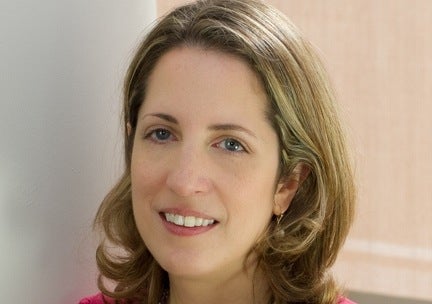 Beth Peshkin began her career while watching a TV show on the “Elephant Man” — the Englishman who became well known in London in the late 1800s because of his severely deformed, tumorous head and body.  At the time, he was thought to suffer from neurofibromatosis (that diagnosis was later changed) so Peshkin signed up for the mailing list for the Neurofibromatosis Foundation. Within months, she attended a conference for patients and their families held by the foundation in her hometown of Baltimore.

At the conference she heard a genetic counselor speak, and thought, “This is pretty cool. This person knows a lot of medical information, but she also works with families and does counseling.”

So in 1990, after college, she took a year to work for the National Cancer Institute’s 800 toll-free cancer information service. “People would call in, often with a new diagnosis of cancer, and talk about their family history and ask why this happened,” Peshkin says. “At the time, we had no idea. We knew cancer ran in families, but we didn’t know why or how to counsel people about their risk.”

She attended graduate school in 1991 at the University of Wisconsin, seeking to become a cancer genetic counselor. Very few people were doing that; genetic counseling was largely confined to prenatal and pediatric fields.

“I told my program director that I would sooner wait tables than take a job that is not in cancer genetics,” Peshkin says. “Attending that neurofibromatosis conference and then working at NCI are great examples of how, if you are in the right place at the right time, it can really change the course of your whole life.”

Now Peshkin is professor of oncology and the senior genetic counselor at Georgetown Lombardi Comprehensive Cancer Center, where she has been a faculty member since 1995. She is also the education director for the Jess and Mildred Fisher Center for Familial Cancer Research.

She is nationally recognized for both her clinical expertise and her research. Peshkin, one of only a handful of genetic counselors in the nation to become a full professor, has authored more than 100 peer-reviewed articles, commentaries and book chapters, and she teaches a graduate course on contemporary issues in genetics and ethics.  She also works closely with faculty in the School of Medicine to expand their genomics curriculum.

Peshkin entered the field of cancer genetics just as it took off. The first genetic counselor to be hired at Georgetown Lombardi, she helped develop the clinical genetic counseling and research program. “The field was so new that we were asking very basic questions about BRCA testing in our research — such as who is interested in getting tested, how do people fare psychologically after testing and what do they do with that information?” she says. The genes for hereditary breast and ovarian cancer, BRCA1 and BRCA2, had just been discovered.

During her long career at Georgetown, Peshkin has worked closely with Fisher Center co-directors Marc Schwartz, PhD, a behavioral psychologist, and Claudine Isaacs, MD, a medical oncologist.  The research conducted by Peshkin, Schwartz and Isaacs and their team has become increasingly sophisticated and complex. For example, their research contributed to acceptance in the field of offering genetic testing to high-risk, newly diagnosed breast cancer patients — the outcome of which could shape a woman’s choice of surgery.

To date, Peshkin has counseled more than 700 individuals. And last year, she reached what she calls a “remarkable” milestone when she counseled a young woman who later chose to have prophylactic double mastectomy due to a BRCA1 mutation. This twenty-something, however, is the daughter and granddaughter of two women Peshkin had previously counseled. “That was really an unexplainably profound experience,” she says. “I am touched by the resiliency of the people who choose to get this information and who then must make really difficult decisions. To see three generations of brave women who accepted this challenge so gracefully is amazing.”

There are now four genetic counselors at Georgetown Lombardi, and Peshkin believes demand for such expertise will only grow — and quickly. This spring, media coverage of Angelina Jolie’s prophylactic surgery and the U.S. Supreme Court ruling that the BRCA1 and BRCA2 genes cannot be patented has raised awareness and increased demand for genetic counseling, Peshkin says. Many labs are now offering commercial tests that incorporate those genes and dozens more that are associated with hereditary cancer. Direct-to-consumer genetic tests are also readily available to those seeking information about their genetic risks for certain diseases, further underscoring the need for experts who can provide context and medical guidance, she says.

“There will be a shift toward looking at the whole genome and that will be a completely different story — how you prepare people to understand the magnitude of information will be daunting,” Peshkin says.

“My genetic counseling colleague at Georgetown said it feels like the earth is moving under our feet. In all the years we have been practicing we have never seen anything like what has been happening in the very short time after the Supreme Court ruling. It has been really remarkable. It is exciting,” she says. “But as more patients pursue extensive genetic testing, the counseling also gets increasingly complicated.  We can’t come up with a tidy risk estimate for all of the many different gene mutations that will be identified, and that is frustrating for us and our patients.”

“I feel like I have lived through a brave new world that just keeps getting more interesting,” Peshkin says. “We are witnessing a paradigm shift in medicine, and I can’t wait to see what the next 20 years hold.”