Women and Men for Others: Healing A Voluntary Military

May 22, 2016 — Twelve men and women from Georgetown University School of Medicine’s 2016 graduating class are clear about the mission that lies ahead: to heal volunteer military service members and their families.

Georgetown is second only to the Uniformed Services University at producing military physicians.

“There is no greater patient population than those who have served in the armed forces,” says Navy Lt. Jeffery Gray, MD, (SOM’16). “The ability to take care of those individuals who have sacrificed so much is incredibly humbling.”

Their needs depend on the battlefield on which they fought. 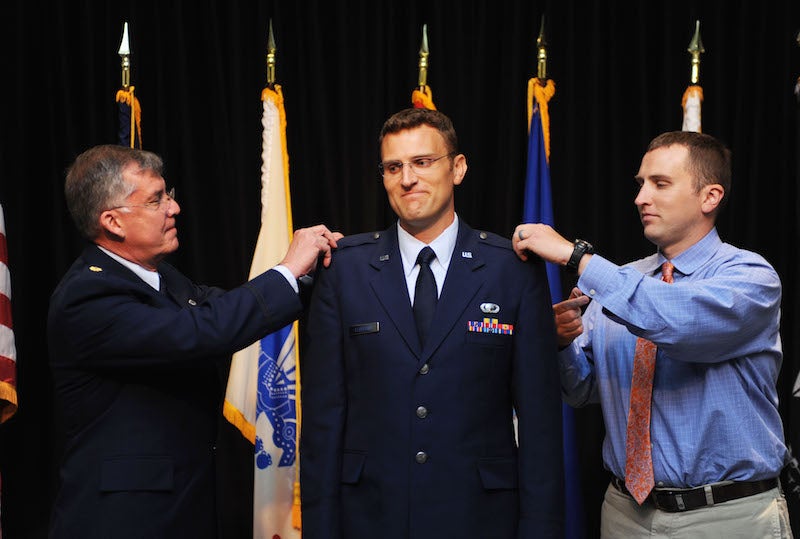 But other less obvious injuries concern the physician officers.

“The invisible wounds of depression, anxiety, addiction and grief related to the stresses of combat, training and other drastic life changes are becoming more and more apparent not only in those who serve our country, but also in their families,” says Army Reserve Capt. Kimberly Fabyan, MD, (SOM’16).

Against the background of health challenges, these newest military doctors recognize an important ally in the delivery of military care.

“Military clinicians can make patient-centered, evidence-based health care decisions without the economic or bureaucratic barriers that clinicians in the civilian sector may face.” Gray says.

“From ground-breaking research facilities around the world to a commitment to humanitarian support after natural disasters, military medicine provides an exciting and unique opportunity,” he adds.

Retired Army Col. Christian Macedonia, MD, delivered the keynote address and told the officers that their oath was for life. He added that while both the military oath and Hippocratic Oath are to humanity, the military oath carries the force of the Constitution.

“May great honors be bestowed upon you for serving, and for offering your service to the greatest nation on the planet,” Macedonia said.

For Elsbernd, serving in the military and practicing “is a rare honor and privilege.”

Fabyan says “staying true” to the Georgetown model of cura personalis is important to succeed in the challenges ahead.

“Who knows what adventures await for the twelve of us?” she says.

“Whether we are in the military for our long careers or pay back our time and become civilian physicians, there is no doubt that our military experience will help mold us into stronger and more diverse physicians.”