Study is First to Explain Type of Antimalarial Drug Resistance 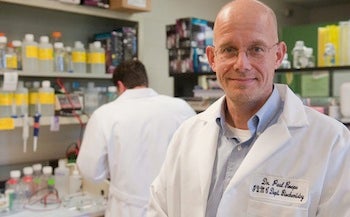 A Georgetown professor has published in the online journal PLOS ONE the first study explaining why drugs designed to fight off malaria stop working in some people with the disease.

“Until now, no studies have separated how resistance to these two different drug actions might work,” says Roepe, also a professor of chemistry. “Our study found genetic and cell biological evidence linking autophagy to resistance to the parasite, which kills the effects of drugs.”

Malaria, a mosquito-borne disease caused by a parasite, killed more than 650,000 people in 2010 – most of them children in Africa, according to the World Health Organization.

Just last month the CDC reported that malaria cases in the U.S. reached a 40-year high.

“Resistance to antimalarial medication threatens the health of more than half of the world’s population,” notes Roepe, who authored the study with colleagues at the University of Notre Dame and the University of Kentucky.

Autophagy, Roepe explains, is the process by which cells remove damaged parts of themselves to restore normal function. In this case, the cell rids itself of the parts damaged by the antimalarial drug. Roepe worked with two alumni of the chemistry PhD program, David Gaviria (G’13) and Michelle Paguio (G’09), as well as current PhD chemistry student Amila Siriwardana (G’16), on the research.

The professor and his colleagues demonstrated in their study that while resistance to drugs like chloroquine, which works to slow the growth of malaria, has been explored, an explanation of the resistance to the cell-destroying effects of the medication has not been fully understood.

“These results have important implications in the ongoing development of new antimalarial drug therapy,” Roepe says. “We hope that by publishing this work in an open access journal, more researchers will access it and can expedite drug development.”