Georgetown Spotlights Intersection of Medicine and the Military 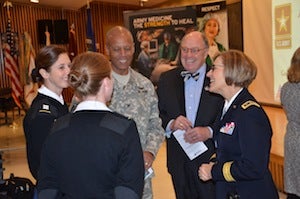 With the aim of educating future physicians about the importance of military medicine and of caring for veterans and their families, Georgetown University School of Medicine marked Veterans Wellness Week Nov. 11-15 with a series of events.

The two main events were the Inaugural Ruggles Lecture in Military Medicine on Tuesday, Nov. 12 and a “Joining Forces” event co-hosted by the School of Medicine and the U.S. Army 1st Medical Recruiting Battalion on Thursday, Nov. 14.

“This whole week has been about military topics so that our students can learn how to take care of active duty soldiers, veterans and their families,” said Stephen Ray Mitchell, MD (new window), dean for medical education at the School of Medicine. “War creates changes in medicine and our medical responses [to injuries on the battlefield. It brings about new methods.”

In conjunction with the Association of American Medical Colleges, Georgetown also held a series of webinars focusing on various topics pertaining to medicine, the military and veterans, with the assistance of Jett McCann, associate dean for knowledge management at the School of Medicine.

A 42-year Navy veteran, McCann serves as adviser to the 38 medical students currently participating in the Health Professions Scholarship Program (HPSP), which provides full scholarships to students in any branch of the military. There are three HPSP-supported undergraduate students enrolled at Georgetown’s School of Nursing & Health Studies.

“Military service was the norm for previous generations,” McCann says. “Exposing current students to the challenges, opportunities and rewards of military medicine seems a responsible thing to do.”

The Ruggles Lecture is endowed by a gift made by Robert and Francine Ruggles. This year’s inaugural talk was delivered by Col. Harry P. Marshall Jr., MD, an assistant professor of surgery at Georgetown and director of surgical critical care at the Veterans Affairs Medical Center in D.C.

Marshall spoke about the role that military medicine has played in advancing techniques to care for the wounded, as well as the role of the military in promoting diversity in medicine.

Being selected to deliver the inaugural lecture “was a great honor,” Marshall says.

“What makes it even more special is that I trained here and now I have the opportunity to give something back to the institution — to influence young physicians and surgeons who are interested in military medicine to continue to build a talent pool of citizen-soldiers to care for the men and women who defend our freedom,” he continues.

The Ruggles’ are longtime supporters of the School of Medicine and have two endowed scholarships that support four to five medical students each year.

Robert Ruggles served in the U.S. Navy during the Korean War and since then has had a strong desire to educate physicians on how to properly care for veterans and their families.

On Thursday, Georgetown welcomed Lt. Gen. Patricia D. Horoho, RN (new window), the surgeon general and commander of the U.S. Army Medical Command, to campus to speak to pre-medical and medical students about the vast opportunities in military medicine.

Horoho described the current period in medicine as “the cusp of a time that will dramatically change how we practice.” Medical technology is changing at a rapid pace, and the health care system needs to be more adaptable and robust than ever in order to keep up with a nation with ever-worsening health indicators, she said.

Further, with more people surviving battlefield injuries than ever before, the physical and psychological needs of veterans and their families will be major issues for all physicians—military or civilian—to consider.

“That’s military medicine, that’s American medicine. It’s the combination of the talent we have across the civilian community, academic universities and military—all partnering together,” Horoho said.

Horoho also encouraged students to consider the needs of veterans as they go through medical school.

“As you’re training within medicine right now, you need to be thinking what skills do I need to have, and what should I be thinking about to be able to serve this population that has sacrificed so much to protect the freedoms that we have,” she added.

With 156,000 employees, the U.S. Army Medical Command is the fifth-largest health care system in the world, she noted.

Mitchell, a former physician in the U.S. Air Force, says the School of Medicine’s relationship with the military has deep roots, dating back to its founding in 1851. A decade after the school was founded, the Civil War broke out, impacting many students and faculty. In 1861, the medical school’s March graduation ceremony was the last public event to be held in Ford’s Theater before President Lincoln was assassinated there.

During World War II, Georgetown offered accelerated medical curriculum for those who enlisted.

“We have had students, residents and faculty involved in every war that our country fights. It is important they are proud of that heritage,” he says.