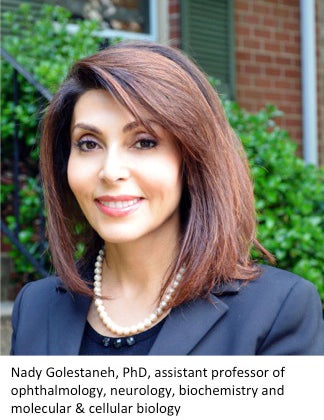 May 22, 2014 – Age-related macular degeneration (AMD) falls in the category of a tragic disease. It is a major cause of elderly blindness in the U.S, afflicting more than 11 million Americans. That number is expected to double by 2050.

There is no effective treatment for the “dry” form of the disease — which accounts for approximately 90 percent of AMD. Therapies slow progression, but eventually all patients with the disorder lose their central vision. The area in the middle of the eye goes blurry and then black, making even faces impossible to recognize, and eventually, vision is lost.

For the wet form, anti-vascular endothelial growth factor (VEGF) therapy can be used, but the therapy is often administrated after significant damage has already occurred in the retina.

The disease has many contributing elements, including genes, aging, stress, diet, race and obesity. But beyond advanced age, no one cause stands out among the rest.

Compounding the problem is the lack of good experimental models in which to investigate those causes.

Nady Golestaneh, PhD (new window), assistant professor of ophthalmology, neurology, biochemistry and molecular & cellular biology at Georgetown University Medical Center, has a theory about how AMD may come about, as well as a unique testing method to explore her ideas. This work is funded by a highly competitive $120,000 grant provided by a nonprofit organization called BrightFocus. Formerly known as American Health Assistance Foundation, BrightFocus is dedicated to finding prevention, diagnosis and treatment approaches for diseases of the mind and sight.

Golestaneh believes that accumulation of waste products underlie macular degeneration. She says excess proteins and other molecules build up because a normal process known as autophagy is disrupted. Autophagy is a self-degradation process that breaks down cellular components to ensure cell survival during starvation.

Autophagy also plays a housekeeping role in clearing damaged organelles, or substructures within the cells. If this routine garbage collection is halted, the build-up of debris can kill a cell. Autophagy is implicated in diseases including cancer and metabolic and neurodegenerative disorders, as well as aging.

First Human Model of the Disease

To test her ideas, Golestaneh has developed what she calls the “disease in a dish” — the first human model of dry AMD. She has examined eyes from five donors with dry macular degeneration and five non-diseased donor eyes.

Golestaneh’s lab isolated the retinal pigment epithelial (RPE) cells — where the disease develops — from the eyes with AMD and then selected them with RPE-specific surface markers and magnetic cell-sorting techniques to obtain a pure population of RPE cells.

“For controls we used the cells that we isolated and selected from eyes of age-matched normal donors. We then cultured the cells to obtain functional RPE monolayer, investigated the phenotypes and functions of the AMD RPE compared to normal RPE and found significant functional and phenotypic differences,” she says.

“Because these cells are directly derived from AMD donor eyes in the absence of any genetic manipulation, they are physiologically relevant and whatever differences in function that we observe will be related to the disease. We are using this model to study autophagy and its implication in AMD.”

Eyes on the prize

So far, Golestaneh’s analysis suggests that the epithelium of AMD eyes not only accumulate debris such as proteins, lipids, other

molecules and cell structures, but also contain the detritus of mitochondria, the power plants of the cell.

Debris can make up the “drusen,” or cellular waste, that is known to accumulate underneath the retina of patients with dry macular degeneration, Golestaneh says.

Golestaneh believes the two are linked: death of mitochondria may result from the buildup of debris and vice versa, and together they contribute to increasing risk of disease.

“But how these factors interact and contribute to the pathophysiology of AMD remains unknown. And that is what we want to understand.

“If we are successful, this study may lead to the discovery of new treatment strategies for AMD — an advance that is so badly needed,” Golestaneh says. “We definitely have, so to speak, our eyes on the future prize of helping patients stave off blindness.”

This research builds upon a previous grant Golestaneh received as part of GUMC’s Partners in Research (new window) program in 2011. Now in its third year, Partners in Research is a pooled research fund generated by philanthropy dollars. Donors have the opportunity to select directly the research projects they wish to fund.