May 22, 2017 – Before the ten students in military service uniforms walked into the Research Building Auditorium for their promotion ceremony on Armed 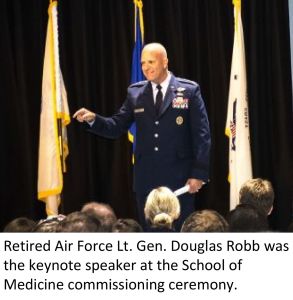 “They told me they were ready,” Robb said at the start of his keynote address. “I want [them] to stand up and let everyone know they’re ready.”

Serving a Special Type of Patient

“Our patients are special,” he said. “[They] have served our country with distinction and pride. Many of them have given more than you will ever know, bearing the burden of both visible and invisible wounds.”

This concept attracted Air Force Capt. Tatiana Zanganeh, (M‘17), to the field of military medicine. “You get to serve two of the greatest professions that exist,” she said. “To be able to do both and have the potential to be a leader in both is really exciting.”

The School of Medicine’s commitment to military medicine dates back to 1851 and is second only to the Uniformed Services University at producing military physicians.

“One of the best parts about this program is that there’s so many students doing HPSP you’re not alone,” said Navy Lt. Alec Emerling (M‘17). “That interaction with other military personnel allows you to fully appreciate the fact that you are becoming both a physician and a military officer.”

“I was thinking about a few other schools but the fact that Georgetown has such a storied tradition in training some of the best military medical professionals was a huge draw,” said Army Capt. Jack Lally (M‘17).

“We’re about ready to celebrate Memorial Day, and I hope each of you remembers the true meaning of that day of remembrance,” Robb said. “Your goal is to 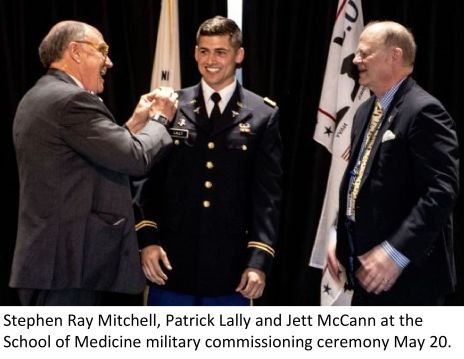 make sure that more of our service members, your fellow brothers and sisters in arms, have the opportunity to be a part of Labor Day festivities than listed on the roll call at a Memorial Day remembrance.”

For Lally, Memorial Day has additional significance. A service at his local parish years ago inspired him to pursue military medicine.

“I went to Mass and there was a beautiful service afterward and I just thought at that point that I wanted to take care of people who fight to take care of us,” Lally said.