FEBRUARY 24, 2015—When to test. That is the question that many young women face when their mothers or sisters—or both—have a hereditary BRCA1/BRCA2 mutation that substantially increases their risk of breast and ovarian cancer.

Because genetic testing at a young age presents a clinical dilemma—what to do if you are BRCA1/2 positive?—most experts suggest waiting until age 25 or later to test. 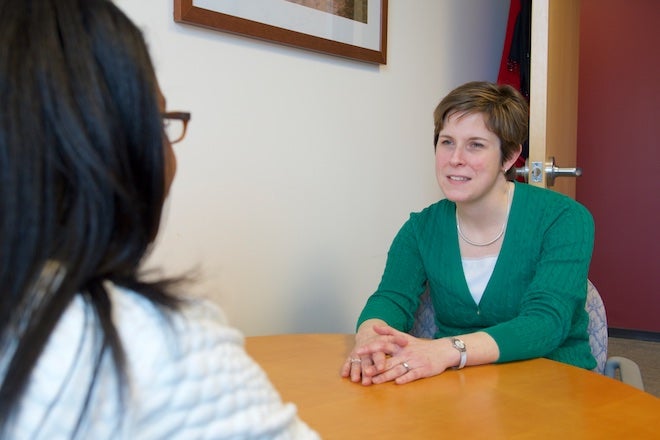 O’Neill headed a pilot study, funded by a Nina Hyde Center for Breast Cancer Research Award through Georgetown Lombardi, that found that young women at risk of inheriting a mutation experience measurable distress about cancer risk—even before they undergo genetic testing.

“Many of these young women have told us they aren’t satisfied with the way they learn about hereditary breast and ovarian cancer and that the support they get from their families is often not enough,” O’Neill says.

She and her colleagues have set out to help these young women—as well as genetic counselors—make informed and thoughtful decisions about whether or not to undergo genetic testing, and then how to interpret the results.

“We don’t want to dissuade women from being tested, but rather to provide them an opportunity to stop and think and consider how they will feel following testing and what they will do with the information,” says O’Neill.

Using funds from the National Cancer Institute, O’Neill is expanding the pilot study to include 150 BRCA1/2 carriers, tested or treated at Georgetown over the last 20 years, and their younger blood relatives.

Today there is little guidance for young women in making testing decisions or in using the results to guide their health decisions, says O’Neill.

“Many women who test positive may choose to have risk-reducing mastectomy or oophorectomy, while others will choose regular screening, while others will use chemopreventive agents to reduce their risk. The timing of these are factors that young women may not consider in their rush to be tested.”

By understanding the emotional and familial climates that lead young women to seek genetic testing, O’Neill and her team will use these data to guide the development of an intervention that would help young women visualize outcomes from a test, and to consider all available options.

Another Georgetown Lombardi program aims to assist Ashkenazi Jewish women at high risk for BRCA1/BRCA2 mutations. Researchers have teamed up with Sharsheret (new window), a national not-for-profit organization that provides support for young women and families of all Jewish backgrounds facing a breast cancer diagnosis.

“We want to help the organization deliver programs that are firmly rooted in scientific evidence and driven by the needs of young women,” he says.

Research designed to help women face their genetic risk, like O’Neill’s, are so important “because we are seeing younger and younger women making important life decisions,” says Tercyak.

“There is so much ahead of them to look forward to—finishing school, starting a career, getting married, having children—but cancer risk in the family can threaten to take it away,” he says.

Research described in this article was funded by National Cancer Institute Grant #R03CA178763.