Partners in Research: Community Support for Local Research with a Global Impact

June 1, 2017 — In October, Georgetown researchers were awarded grants by Partners in Research (new window) to study depression, autism, pancreatic cancer and preeclampsia. At the recent Partners in Research Showcase, the grant recipients shared their initial findings with the funders.

Partners in Research is a program that brings together scientists and science-minded members of the community. Hosted by Nobuko Sasae,  wife of Japanese Ambassador Kenichiro Sasae and diplomatic advocates chair of Doctors Speak Out, the research showcase was held May 31 at the Japanese Ambassador’s residence.

In addition to inspiring members of the community to support science, Partners in Research was 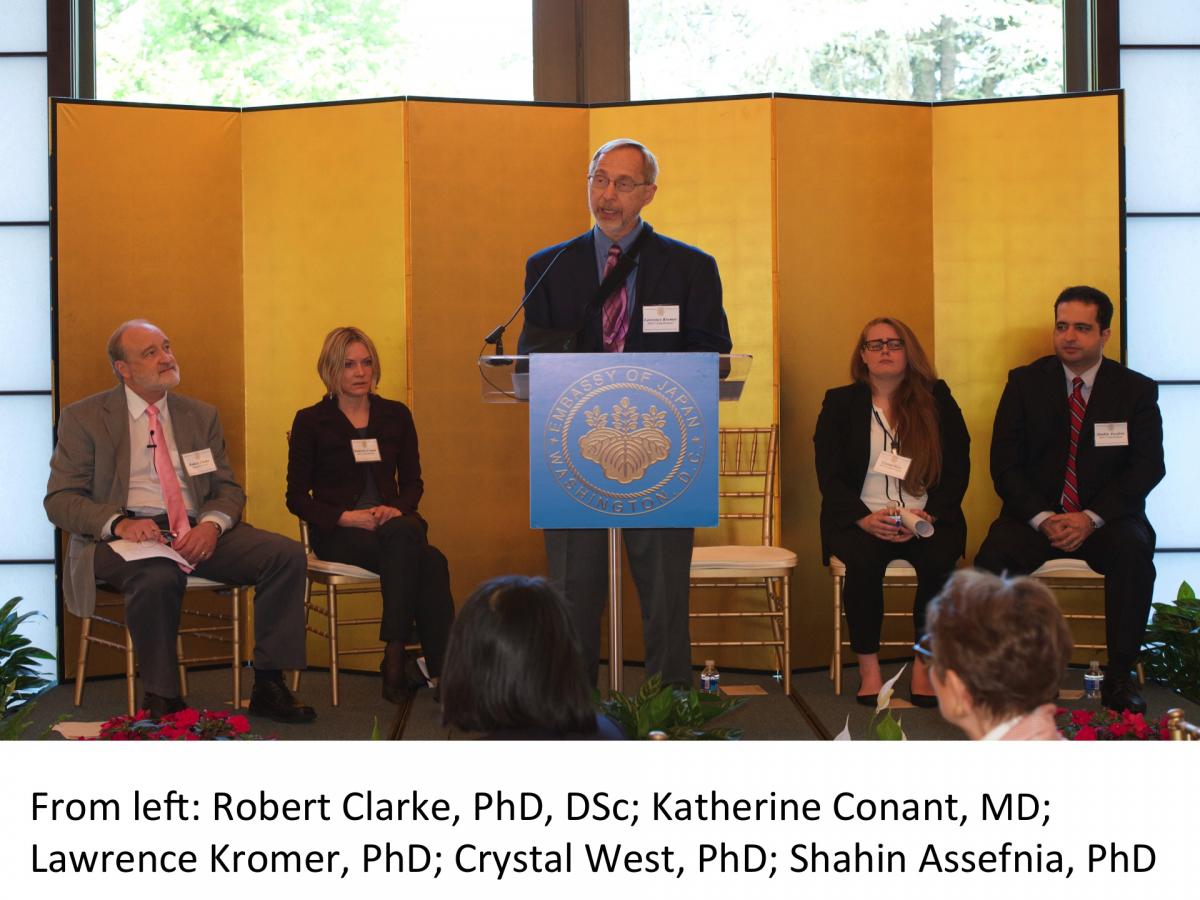 developed to provide Georgetown researchers with initial seed funding to pursue innovative ideas with the potential to make a significant impact in health and medicine. “Partners in Research was created to fill a gap – very early stage, high-risk, high-reward research that nobody else will support,” Clarke said.

Since its inception five years ago, the program has funded 22 projects and raised more than $830,000. “We have gone way beyond our expectations,” Clarke said. “Our trajectory is stunning for this group and you should all be very proud of yourselves.”

Research That Could Reduce Maternal and Fetal Deaths

Having support from the local community was particularly meaningful to Partners in Research grant recipient Crystal West, PhD.

“I think this program is incredible and I talk about it all the time to my research friends and people in the department and it’s really been the highlight of my Georgetown experience,” said West, assistant professor in the department of medicine’s division of nephrology and hypertension at Georgetown. “It was very special for me personally to have my project selected by members of my community.”

West received a grant from Partners in Research for her research on preeclampsia. Defined as high blood pressure after 20 weeks of pregnancy and accompanied by evidence of damage to another organ system, preeclampsia affects about 10 million pregnant women worldwide every year. About 80,000 women and 500,000 babies die each year from causes related to preeclampsia.

With the award from Partners in Research, West studied how a protein known as PAR2 affects blood pressure in pregnancy. In animal studies, she found that PAR2 expression increased during pregnancy and when PAR2 was activated, it decreased blood pressure without decreasing renal sodium retention, which is necessary for maternal blood volume expansion.

In March, West used the data to apply for a research grant. In addition to her work on a manuscript that she plans to submit by the end of the month, West has also presented her findings at the department of medicine’s research day and submitted abstracts to two different research conferences.

“The long-term goal of this research is to find new therapeutic options for women with preeclampsia,” she said. “This could ultimately result in decreased maternal and fetal deaths and reduce the long-term cognitive and cardiovascular burden to children by improving fetal nutrition.”

Gratitude to “Champions for Science”

Describing them as “champions for science,” West expressed her gratitude to the members of Partners in Research.

“If there were more programs like this and more people like you, we wouldn’t have the fear and skepticism that’s cropped up around science recently,” she said. “I wanted to thank you personally for what you’ve done for me but also for what you do in your roles as champions for the scientific community as a whole, for going into your communities and telling them what you know science to be. You are so very valuable to this process.”