MARCH 27, 2014 — In the life of a medical student, there aren’t many days more important than Match Day. Every year at noon on the same day, medical students across the country find out where they will go for their residency programs.

On Friday, March 21, Georgetown University School of Medicine (new window)’s class of 2014, accompanied by friends and family, opened their envelopes that revealed the next destination in their medical careers.

According to Dean Stephen Ray Mitchell, MD (new window), 51 percent of this year’s graduating students were matched with the country’s top 25 residency programs, as ranked by U.S. News and World Report.

“As usual, 25 percent of you are homebodies, you’re not going anywhere,” Mitchell told the students during the Match Day ceremony. They will become residents at hospital systems within Washington.

The National Resident Matching Program (new window) (NRMP) uses a mathematical algorithm that pairs the rank ordered preferences of both applicants and program directors to produce the best fit.

This year, 200 graduating students learned where they will do their residencies, including two undergraduate alumnae of the School of Nursing & Health Studies (new window), Tina Zhang (NHS’10, M’14) and Emily Wang (NHS’08, M’14). 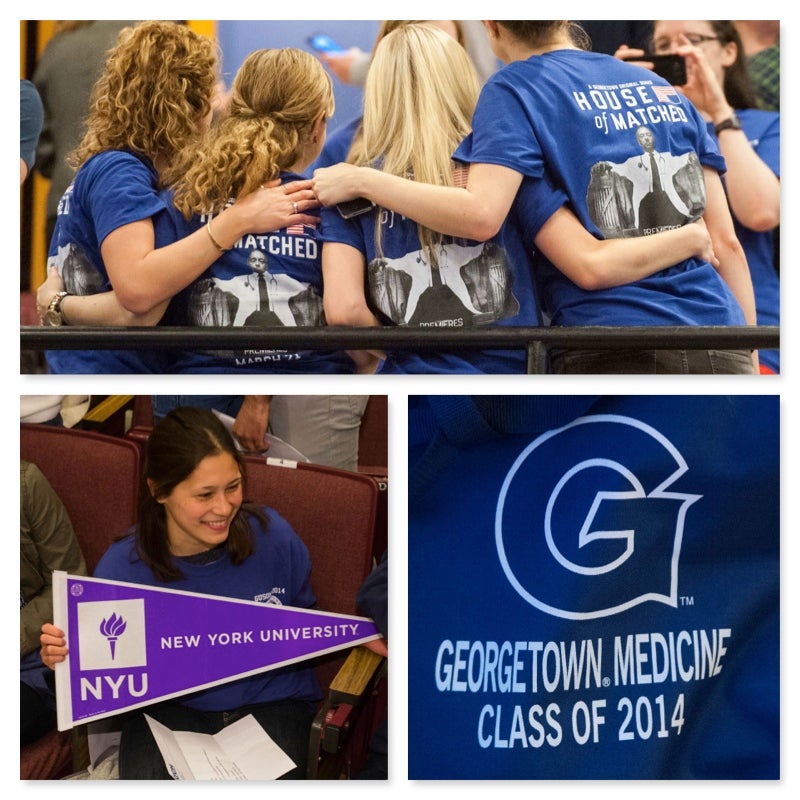 The emotion is hard to describe, says Ryan Hubbard (M’14), who matched with his first-choice program in physical medicine and rehabilitation at the Mayo School of Graduate Medical Education (new window) at the Mayo Clinic in Rochester, Minn.

“We have had a busy past four years, and spent a lot of time juggling tests, classes and being in the hospital, all the while trying to learn and experience as much as possible,” Hubbard says. “It’s a strong wave of emotion on Match Day when you come to the realization that you are going to be a doctor and all your hard work has paid off.”

Hubbard visited the Mayo Clinic in November and says he felt an instant connection.

“A lot of the qualities that are instilled in us here at Georgetown to truly set us apart as physicians—such as compassion, patient-centered care and excellence—are also embodied at Mayo. It just felt like a perfect fit,” he says.

“It’s close to my hometown in Kentucky and I’m just thrilled,” Walker says. “It’s an outstanding program, I’m very excited to be going there.”

Deciding to work in medicine was an easy decision for Hubbard, who shadowed a pediatrician and two cardiologists when he was in high school in Charlotte, N.C.

“I was fascinated by the impact they had on their patients,” Hubbard says. “It was amazing to see and made me desire the ability to touch someone’s life in that way.”

Walker, whose mother is a radiologic technologist, was influenced to become a doctor by care providers she regularly spent time around while growing up. She says her mother would talk to her about people within their rural community who struggled to get the medical care they needed.

“I want to help people from where I’m from,” Walker says. “My long-term goal is to be out in the communities and to do whatever I need to do for my patients. I want to soak everything in and learn as much as I can to become the best physician possible.”

Both Walker and Hubbard will be the first physicians in their families.

Hubbard’s attributes his success in large part to his parents, who he says have been supportive at every step.  Both parents were at his side on Match Day.

“It’s nice to see his hard work and dedication pay off in ways that we have been hoping and praying for over the last four years,” says Hubbard’s mother Iris. “We’re extremely proud of him that he set out a plan and that it has played out to where he got his first choice.”