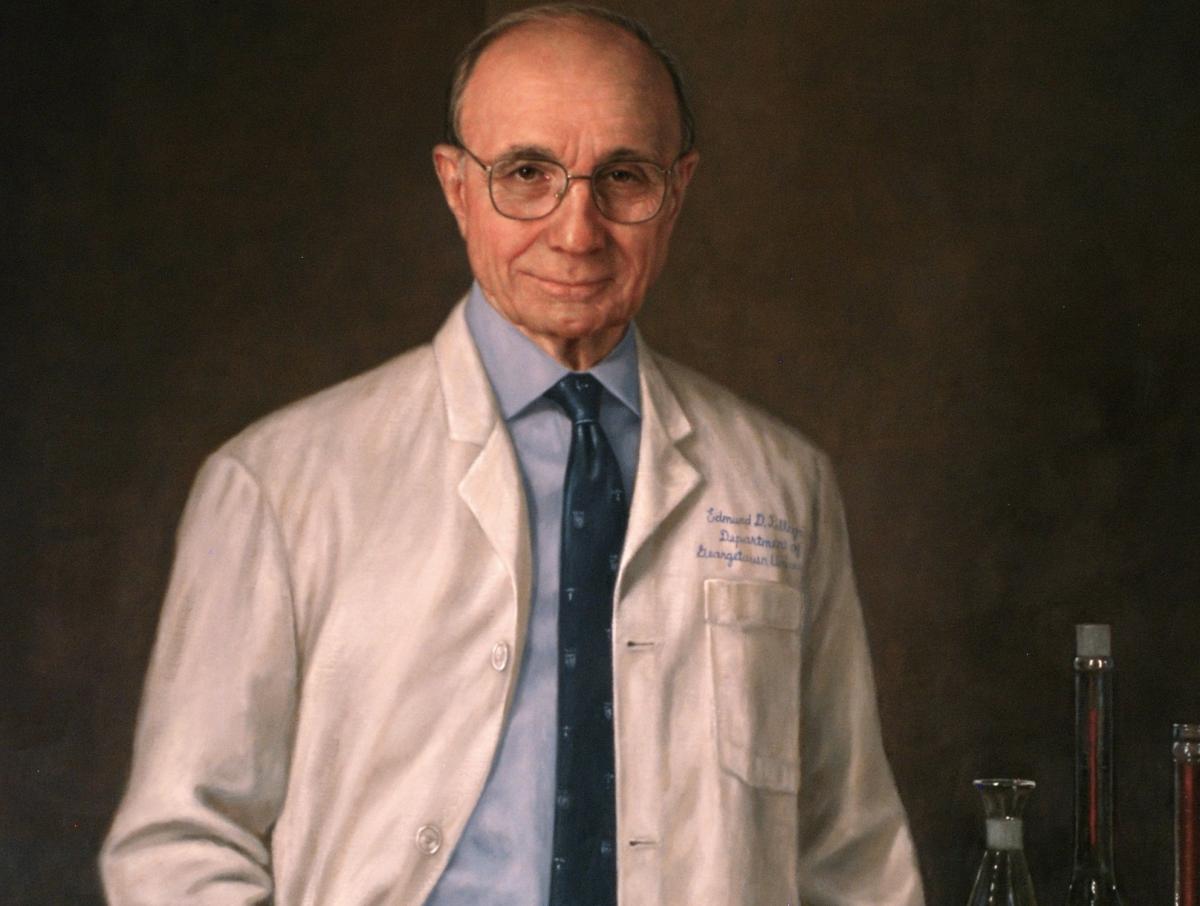 Georgetown University Medical Cancer (GUMC) honored Edmund Pellegrino, MD, MACP, a physician and scholar known as a founder of contemporary medical and bioethics, with the formal renaming of the bioethics center he founded more than two decades ago.

The Edmund D. Pellegrino Center for Clinical Bioethics was dedicated on March 15 following a day-long celebration at Georgetown University that began with a symposium titled Facts of Illness/Acts of Profession: Edmund Pellegrino and the Ethics of Health Care. More than 200 of Pellegrino’s colleagues and top scholars — all of whom are friends, but many who were also his students — gathered for the occasion.

Pellegrino is regarded as one of Georgetown’s pre-eminent scholars. He is now professor emeritus of medicine and medical ethics at GUMC in addition to being senior research scholar at the Kennedy Institute of Ethics and an adjunct professor in philosophy at Georgetown University. Previously, he directed the Kennedy Institute of Ethics and the Center for the Advanced Study of Ethics. Among his other accolades, Pellegrino was president of the Catholic University of America; president and chairman of the Yale-New Haven Medical Center; vice president of Stony Brook University Health Sciences Center and chairman of the President George W. Bush’s Council on Bioethics from 2005-2009.

Howard J. Federoff, MD, PhD, executive vice president for health sciences at GUMC and executive dean of its School of Medicine, welcomed those who came to honor Pellegino’s work and vision and noted that the bioethics center is woven into the fabric of Georgetown because of its collaborative nature.

“The Center for Clinical Bioethics is indeed of paramount importance to us,” Federoff said. “Its contributions, past, present and future, contextualize our work in all dimensions of the healing professions.”

Federoff noted that honored guests in attendance included leaders of hospital systems as well as leaders of university-based bioethics centers, departments of clinical medicine, and associations devoted to the practice of bioethics.

“All of us, I’d say, are under the influence of [Dr. Pellegrino],” said Daniel P. Sulmasy, MD, PhD, the symposium’s moderator. Sulmasy is the Kilbride-Clinton Professor of Medicine and Ethics at the University of Chicago, and associate director of its MacLean Center for Clinical Medical Ethics.

Sulmasy, who also delivered the John Collins Harvey Lecture the evening before the symposium, recalled the first time he read Pellegrino’s writings when he was a medical student at Cornell University . Pellegrino’s writings galvanized his professional identity. He recalled thinking, “This is the kind of doctor I want to be.” Sulmasy eventually studied with Pellegrino at Georgetown and was, at one time, the director of the Center for Clinical Bioethics at GUMC.

The symposium, organized by G. Kevin Donovan, MD, MA, the Center’s new director and Marti Patchell, Pellegino’s longtime executive assistant, engaged themes that have been the focus of Pellegrino’s work, including a philosophy of medicine based in the unique features of the doctor-patient relationship, the importance of mutual trust in the physician-patient relationship and clinical investigator-participant relationship, and, more broadly, the role of the virtues in the philosophy of medicine and in clinical practice.

During a reception following the symposium, Federoff surprised attendees by announcing the renaming of the bioethics center and by unveiling a portrait commissioned by the University. James Crowley’s oil painting of Pellegrino will hang in the new Edmund D. Pellegrino Center for Clinical Bioethics.

“[The center] recognizes your great contribution to your patients, to your colleagues, and to the many communities that have benefited from your interaction and your service,” Federoff remarked.

Pellegrino, now 92, told his gathered friends and colleagues that they could relax — he wouldn’t be giving a speech.

“I came thinking I was sitting in on a small gathering of five or six people and that would be it!” Pellegrino said. “I’d like to thank those who thought — thought — that they were students of mine, but they were my teachers.”

You can watch a video tribute to Dr. Pellegrino by clicking here.