FEBRUARY 20, 2014 – Researchers face a “perpetual challenge” to stay ahead of the evolving infectious microbes they seek to eradicate, said Anthony S. Fauci, MD, director of NIH’s National Institute of Allergy and Infectious Diseases (new window), at a Georgetown symposium Feb. 19.

“We can try to respond [to infectious disease threats] on an evolutionary level, but microbes replicate every few minutes, so we will lose that battle,” said Fauci, who oversees a vast research portfolio at the NIH to combat an array of diseases. “What we can do is to match them with our intellectual capabilities –­­ we have the capabilities of science and public health measures on our side.”

The symposium took place less than a week after President Obama announced a massive global effort to combat the spread of infectious diseases. 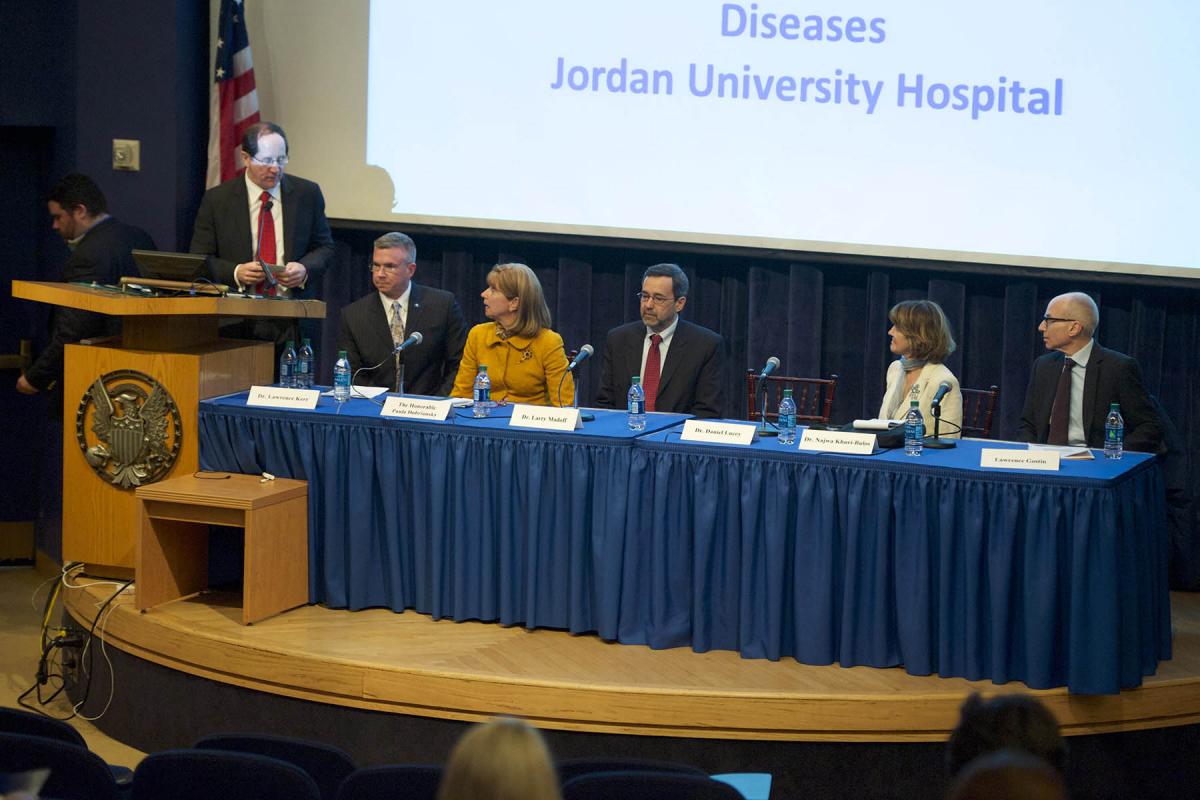 Two panel discussions – one on Middle East Respiratory Syndrome (MERS) and the other on the growing numbers of polio cases in war-ravaged Syria – also took place at the symposium.

Polio in Syria provides an example of how conflict can result in the spread of a disease that had been controlled, while MERS is a new disease requiring international cooperation to understand and combat, said John Monahan, an advisor for global health to Georgetown President John J. DeGioia (new window) who spoke at the symposium.

Dobriansky stressed that public health and global security are inextricably intertwined, particularly when it comes to combatting infectious diseases unconstrained by borders or national polices.

“Health issues, if ignored by policy and national security foreign policymakers, will get out of hand,” she said. “There is a great impact and influence where you have scientists who are on the ground working on the front lines of foreign policy.

“This kind of event speaks exactly to what we mean when we think about global health at Georgetown,” Monahan said. “We bring pressing health issues together with policy, diplomacy and security issues. These are really serious problems. Every one of us – whether we are in government, academia or are a student – must [think] about how we can take action.”

Monahan and SFS Acting Dean James Reardon-Anderson (new window) both acknowledged the work and vision of Dean Carol Lancaster in the field of global health diplomacy.

Daniel Lucey, MD, of the microbiology and immunology department at GUMC and one of the event’s organizers, said he hopes the symposium will serve as a springboard for future events at the intersection of global health and foreign policy.

“I am very encouraged by the level of cross-campus collaboration and synergy to make this event happen,” said Lucey, also co-director of GUMC’s master’s degree program in Biohazardous Threat Agents and Emerging Infectious Disease. “There seems to be fertile ground to organize more events around these themes.”