MAY 8, 2014—Most investigators apply for project support from federal agencies. But for Christopher Loffredo, PhD (new window), the opposite happened. The U.S. Department of Energy sought him out, asking him to join a study that has him traveling to a far corner of the world multiple times a year.

The destination? Think of borscht, vodka and the recent Winter Olympics.

Loffredo, a professor of oncology and biostatistics at Georgetown Lombardi Comprehensive Cancer Center (new window), and co-director of the Cancer Prevention and Control Program (new window), is known for his international work on the environmental links to cancer.

He has worked in Baltimore, Sweden, and Finland on hepatitis C and environmental factors related to liver and lung cancers. The National Institutes of Health has funded his research in Egypt to study liver and bladder cancers. His work in that country, which has continued for 17 years, has also led to establishment of a tobacco research center in Cairo, under his direction.

But the opportunity provided him by the U.S. Department of Energy to study radiation effects in Russia is one of a kind. 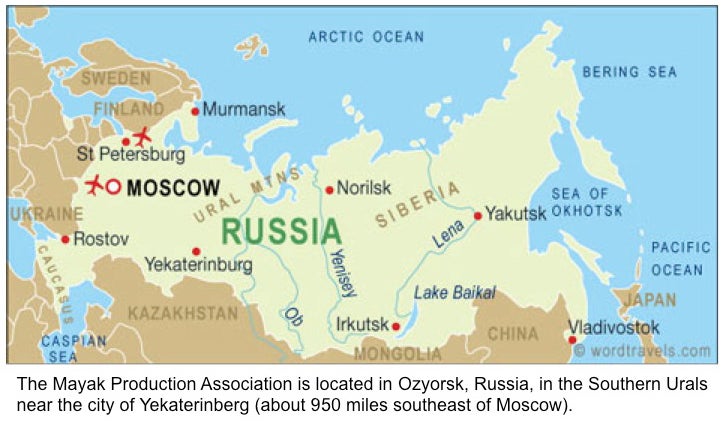 Loffredo was asked to join a 15-member U.S. team—working with a Russian team of scientists many times that size—to help study the risk of long-time exposure to low levels of radiation. In Russia, a long time means 66 years—or since a massive nuclear weapons production complex called the Mayak Production Association was built in the Southern Urals in 1948.

The Mayak facility no longer produces weapons, having morphed into a production facility for peaceful medical purposes. Yet the complex— Mayak for short—remains a uniquely contained test case for studying radiation effects in that it heavily restricts entries and departures.

“There really is no other place like this in the world. I study workers who have been there for decades—sometimes 50 years—which is unlike other countries where there is so much mobility,” Loffredo says. “This is effectively a closed city.”

Loffredo says the U.S. Department of Energy was particularly interested in Georgetown Lombardi’s state-of-the-art tumor biorepository, which Loffredo was asked to recreate at Mayak.

The Mayak facility has been collecting biological specimens on its workers since 1951, including tumor tissue on workers and residents who develop cancer, as well as autopsy tissue for many in the town.

“That is extraordinary—no one else does that,” Loffredo says. Blood and urine are routinely collected from selected groups, including family units in which one or two parents work at Mayak.

Loffredo and his colleagues are working to automate the data process—historically done manually—in order to make the treasure trove of information more accessible. Now, as a result of their work, a scan of a barcode on an individual sample brings up a computerized chart detailing that person’s health and history of exposure.

Loffredo is also able to bring back tumor and tissue samples to Georgetown, where he is studying the increased risks of liver and breast cancer at Mayak.

More than 300 studies have been published so far from the Mayak health project, revealing that rates of liver, lung and bone cancer are significantly elevated in Mayak workers and residents, especially in women—for reasons that are not yet understood.

The findings underscore the fact that, in the early years of atomic and hydrogen weapon production, no one knew what safe levels of radiations were, Loffredo says. And, while Mayak and many other facilities around the world lowered the doses of external radiation since the late 1950s, the need to better understand and define the risks of radiation remains as strong today as ever.

“A lot of the cancer incidence we have seen in the study came from that earlier, more heavily exposed period,” Loffredo says. “That is not to say that these chronic lower levels shouldn’t be lowered further, given what we might find out.”

The Department of Energy, which has been tracking the data for 15 years, hopes to use the findings to set better standards for U.S. radiation industry workers, he says.

Loffredo, who has been travelling to Mayak for five years, says his repeated visits have helped melt away some of the barriers he first encountered due to language and cultural differences.

“The Russians welcome us now with open arms. They cook for us, bring us little treats. We have picnics and barbeques together,” he says.

But more importantly, he expects the East-West collaboration will yield information that will have a significant and enduring impact on human health.

“Findings from the project will have worldwide significance, protecting the health of workers, as much as possible, once we understand and define the risks of chronic low dose radiation,” Loffredo adds. “I am honored to help out.”

The research described is supported by the Department of Energy (DE-FC01-08HS08032). Georgetown Lombardi is one of only 41 comprehensive cancer centers in the nation, as designated by the National Cancer Institute (P30 CA051008).