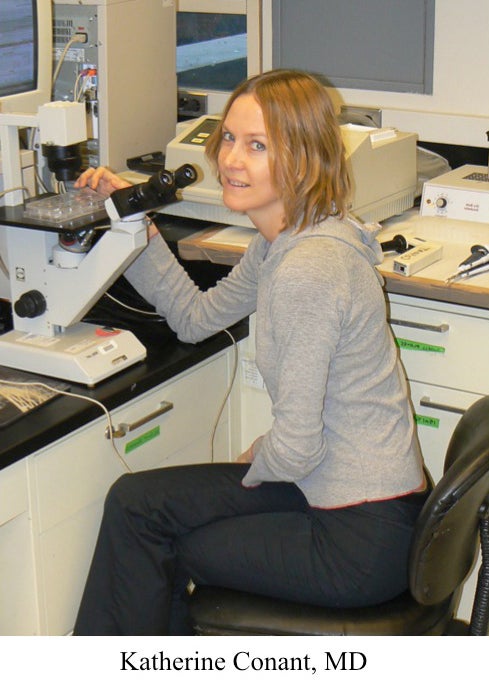 SEPTEMBER 12, 2014—In the research world, there is a familiar Catch-22. Bright ideas require research funding to generate preliminary data, but it is notoriously difficult for a researcher to secure funding without having that preliminary data.

“You need to have preliminary data to get external funding and you have to have money to get preliminary data,” says Conant, an associate professor of neuroscience at Georgetown University Medical Center (new window).

“It’s a difficult time for everyone because of dwindling federal support, but especially for young investigators,” she says.

Conant, however, is now the recipient of National Institutes of Health funding because of a powerful leg up she was given by benefactors Edwin H. Richard and Elisabeth Richard von Matsch in 2009, shortly after she came to GUMC.

As part of a $1.5 million endowment made by the von Matsch family, Conant received generous support to study the mechanisms of neurodegenerative diseases and the identification of druggable targets. The endowment, the Edwin H. Richard and Elisabeth Richard von Matsch Distinguished Professorship in Neurological Disease, is designed to support a “prominent young” faculty member. Conant is the first recipient.

Conant said this funding has provided her a vital research lifeline, buoyed by the highly supportive scientific environment of GUMC. She is now on her way to decoding a new molecular pathway underlying a variety of neurodegenerative diseases, including Alzheimer’s and HIV-induced dementia.

Conant has leveraged this support to secure federal funding that will take her research to the next level. She and her colleague, GUMC neuroscientist Kathleen Maguire-Zeiss, PhD (new window), secured a five-year, $1.2-million grant last year to investigate novel molecular mechanisms that contribute to the development of HIV-associated neurological disorders.

Conant has always been fascinated by research in general, and the nervous system in particular. After earning her MD at Boston University and completing a residency in adult neurology at Georgetown, Conant joined a laboratory at the NIH, where she dove headfirst into the study of glial cells—the cells that support neurons and brain function.

She became intrigued by the proteins these cells produce, especially “molecular scissors” known as matrix metalloproteinases (MMPs) that appear to snip key proteins involved in communication between neurons.

She has spent the better part of her career since trying to learn everything she can about MMPs—how they contribute to normal learning and memory and how these processes may go awry when levels are elevated in the setting of brain injury.

Conant has discovered that the levels of MMPs are abnormally high in diseases such as HIV-induced dementia, but she is still studying why this matters.

“They are probably causing damage through excess cutting of molecules that are important to healthy function of synapses. This disrupts neurotransmission,” she says.

This research offers the potential for treating a variety of brain disorders in new ways, Conant says. Given that MMPs exist throughout the body and have been linked to various inflammatory diseases, some researchers are trying to inhibit their activity as a potential therapy. Inflammation is a driving force in HIV dementia and has been associated with the development of Alzheimer’s.

Conant has published several research studies as a result of support from the von Matsch professorship, and has seen an increase in publications in high-profile journals on the subject over the last year or two.

“The more research, the merrier. This is really novel stuff, and could provide some nice new pieces to the puzzle of brain degeneration and its treatment,” Conant says. “Having the support I have had, both through the endowed professorship and from my department chair and my colleagues, has made all the difference.”