MARCH 3, 2015—Conventional wisdom might indicate that bigger brains and enhanced memory performance in youth should help protect against the cognitive declines seen decades later in Alzheimer’s disease.  Yet for two Georgetown University scientists, recent research appears to suggest the opposite.

Can increased size and enhanced performance in certain key brain regions foreshadow a precipitous decline in cognition late in life?

The scientists are searching for that answer in two genes known to substantially elevate the risk of Alzheimer’s – APOE4 and a variant of APOJ.

The researchers’ surprising findings provide hints into the effects two Alzheimer’s risk genes, APOE4 and a variant of APOJ, have on early brain development and function.

“We are finding that specific genes affect behavioral, functional and anatomical differences in the brain more than 40 years before the onset of Alzheimer’s,” says G. William Rebeck, PhD (new window), professor of neuroscience at Georgetown University Medical Center (GUMC). 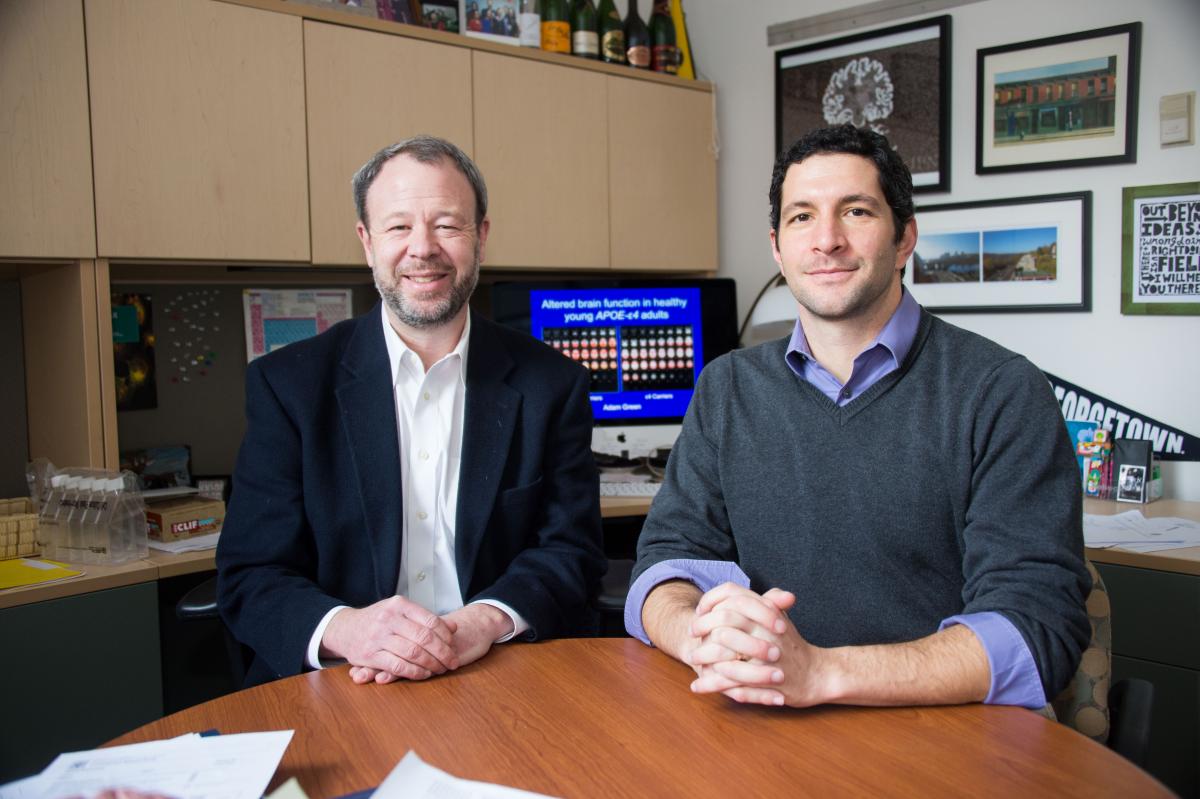 “It’s not unexpected that our genes might affect our brains, but the technology and our knowledge are advancing to the point that we can start to identify which genes are important in the brain and what effects they have.”

Rebeck is collaborating with Adam Green, PhD (new window), an assistant professor in the department of psychology at Georgetown, to examine this further, as their research interests overlap—Green investigates genes that change normal brain function, and Rebeck studies genes that affect a person’s risk of developing Alzheimer’s.

“We only have a few pieces of the puzzle at the moment, and we are guessing at the rest, filling in the picture. But these pieces are key—just so interesting and unexpected,” says Green.

The heritable risk of developing Alzheimer’s is 60 to 80 percent, and it is known that APOE4 substantially increases risk of developing the disease. The APOE gene exists in three common variants. APOE3 is the most common; APOE4 is present in a quarter of the U.S. population; APOE2 is present in 10 to 15 percent of the population and is protective against Alzheimer’s.

Since APOE4 was discovered two decades ago, about 15 new genes that confer risk to a more limited degree have been discovered. Another common risk gene is the C variant of the clusterin (CLU) gene, also known as APOJ because it encodes a protein similar to APOE.

Rebeck, Green and their other Georgetown collaborators used functional magnetic resonance imaging (fMRI) along with cognitive testing to look at the difference in brain anatomy and performance in carriers of the APOE4 and the APOJ variants. Participants in their study were either college students or community members with no history of a mental disorder, and with a median age of 24.

Quickly, their studies and findings resulted in a spate of publications, three of which were published within the past year.

A study published in Neuropsychologia looked at the effect of both genes on a task of “executive attention,” or focus, undertaken by participants who were in an fMRI machine.

The findings revealed that the genes had an additive effect on brain activity during the test — participants with both APOE4 and APOJ had decreased brain activity, especially in the medial temporal lobe, a brain area affected early in Alzheimer’s.

A second study, also in Neuropsychologia, reported that participants with the APOJ variant had significantly better working memory performance than those without the variant, as measured by increased volume of the brain’s gray matter that processes memory.

Finally, a study published in Frontiers in Human Neuroscience (new window) suggested that the two key Alzheimer’s genes are linked to greater volume in the entorhinal cortex, which is involved in consolidation of memories. It is one of the earliest brain regions affected by the disease.

Because of the high incidence of Alzheimer’s among carriers of these genes, the studies provoke questions about the link between executive attention and the later risk for Alzheimer’s in young people, Green says.

Rebeck and Green are exploring various theories that could explain the effect of the two risk genes on brain anatomy and function.

Perhaps the most intriguing is the “antagonistic pleiotrophy” hypothesis, which refers to the notion that Alzheimer’s risk genes confer an evolutionary advantage early in life—the increased performance in certain brain areas—until procreation occurs.

“It’s the idea that evolution only cares about you until you reproduce,” says Green.

But there is a price to pay, Rebeck adds: “Think of driving a new car hard and fast in the first few years. It will soon wear out.”

Another theory is that increased brain volume due to Alzheimer’s risk genes represents a failure of brain synapses to prune themselves normally as the brain develops during adolescence and early adulthood.

Inflammation can also be at the heart of enlarged brain areas—due to their genes, these structures are working harder and thus causing inflammation. The connection between inflammation and Alzheimer’s is not new.

“Chronic inflammation in the brain is a terrible thing, and has long been linked to Alzheimer’s,” says Rebeck.

The imaging studies could be used in two ways, the researchers say. One is to understand why anatomical and behavioral changes increase Alzheimer’s risk. The other is to help scientists see if experimental neuroprotectant agents are having an effect.

“We are not there, of course. But we are on the cusp of understanding the evolution of a brain that morphs into Alzheimer’s,” Rebeck says.