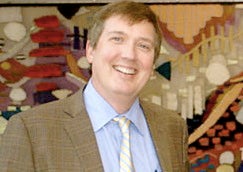 For Alexander Dromerick, MD, a neurologist and rehabilitation specialist, one of his clinical studies aimed at helping stroke patients recover use of their arms is taking much longer than he’d like. “Not being able to use an arm and its hand causes great distress to patients, because they are forced to depend on others,” he says. Dromerick adds that this disability is no small issue — about half of the 700,000 strokes that occur in the U.S. each year produce arm weakness or paralysis.

Dromerick and his team of investigators started planning ICARE, a phase III clinical trial, in 2004 and they believe the findings will be published in 2015. But he now predicts that clinical trials like this will be done lickety-split — in a fraction of the time of ICARE. That’s because of a new collaboration that harnesses the research expertise of Georgetown University and MedStar National Rehabilitation Network’s (NRH) clinical research and patient care.

Last summer, the two entities announced creation of the Center for Brain Plasticity and Recovery, which is dedicated to understanding how the brain attempts to repair itself after injury, and whether it can be coaxed to do more. Dromerick, the center’s co-director focusing on clinical research, says plasticity offers a potentially powerful recovery tool in conditions such as stroke, traumatic brain injury, multiple sclerosis and dementia.

Neural plasticity is one key to stroke recovery. One of the most effective ways to study the phenomenon and learn how to manipulate it is to have many patients enrolled in clinical studies, and a team of scientists at the ready to interpret results and suggest further potential advances, Dromerick says.

“A partnership between a medical school and a rehabilitation hospital is not novel — a lot of institutions say they are doing it, but few have devoted the kind of resources and energy that Georgetown and MedStar NRH have to this effort,” he says.

“There is a long and illustrative history of studying brain recovery at Georgetown University Medical Center (GUMC), but it has largely been in the laboratory, with very few clinical research programs,” he says. “And while MedStar NRH is one of the top 20 rehabilitation centers in the country, we don’t have the depth and breadth of neuroscientists that Georgetown has.

“The only way an effort of this magnitude can succeed is to combine our resources,” Dromerick says.

Dromerick points out that it’s not just Georgetown neuroscientists committed to this effort. The university has marshaled its strengths in the sciences and humanities, including linguistics, foreign languages, psychology and philosophy, to match them with MedStar NRH’s clinical and patient care expertise.

To underscore its commitment to the success of the brain center, MedStar NRH recently named Dromerick, a professor of rehabilitation medicine and neurology at GUMC, as vice president for research for its rehabilitation network.

And together, Dromerick and the center’s director, Elissa Newport, PhD, will recruit a new group of center scientists, including those with clinical backgrounds. In this way, “there will be a circle effect. We will go from bench to bedside, and from bedside to bench.”

There are now about 1,100 stroke patients admitted yearly to MedStar Georgetown University Hospital, GUMC’s clinical partner, and to the MedStar National Rehabilitation Network. Dromerick sees a time when, through evolution of the center, he and other brain center researchers will be able to design studies that can potentially include and benefit the thousands of stroke patients cared for in the 10 MedStar hospitals throughout Washington, Virginia and Maryland.

“Most people who suffer a stroke have some recovery; I want to understand that process and tap into it and improve the response,” Dromerick says. “My goal is to improve the lives of people with stroke, and what we learn from that effort can be used to help treat traumatic brain injury, brain tumors, multiple sclerosis, even spinal cord injury.

“I anticipate that with this center, we will be able to make a lot of progress very quickly,” he says. “I don’t want to plan another decade-long study.”